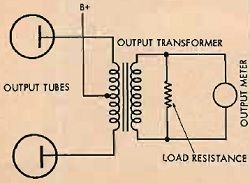 The operation of audio transformers has long been surrounded with an aura of mystery. This article distinguishes the different forms of distortion an output transformer can produce, and gives some simple measurement methods.

A few simple facts about transformers seem to get overlooked: when the tube curvature causes distortion it distorts all frequencies; but the distortion a transformer causes due to nonlinearity of its magnetizing current is concentrated at the low-frequency end. The worst transformer made will not distort the middle frequencies and the way it distorts at both lower and higher frequencies is one of the things we shall clarify in this article.

The Importance of Efficiency

Amplifiers are rated to give a certain maximum output, determined by the performance of the output tubes. However, the output power is always measured on the secondary side of the output transformer, as shown at Fig. 1. 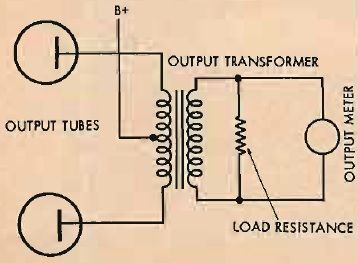 Fig. 1. Usual method of measuring output power consists of calculating the watts dissipated in a load resistor connected to the secondary of the output transformer. While this is the available power output, the output tubes actually deliver a little more than this.

This is a little difficult to verify by actual measurements. The simplest step towards is to remove the secondary resistance load and apply a plate-to-plate load on the primary, as at Fig. 2. If the secondary load was 16 ohms and the transformer refers this back to be, say, 6000 ohms plate-to-plate resistance, then a 6000 ohm resistor, of at least 50 watts dissipation, should beconnected across the primary. The power is now delivered by the output tubes directly to the load, without passing through the output transformer, and can now be measured in the 6000-ohm resistor. 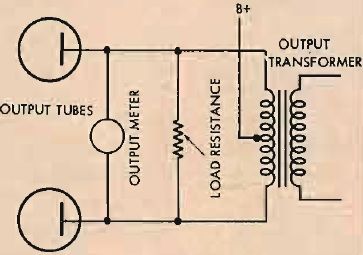 But all of the losses in the output transformer have not been removed by transferring the load from the secondary to the primary. The transformer core loss is still present. If, of the 3 watts lost in the transformer, 1 watt is due to core losses and 2 watts to losses in the winding resistances, we shall only measure 52 watts in the load connected to the primary, because the odd 1 watt will still be lost in the core.

This discussion is based on a transformer having an efficiency of 95 per cent. A 50-watt output transformer with an efficiency of 95 per cent, and a really good frequency response from 20 to 20,000 cps, is going to be fairly large and expensive. A 5 per cent power loss is only 0.2 db, so some will argue that we can accept a transformer of 90 per cent efficiency, which still represents a loss of less than 0.5 db, in order to achieve better quality in terms of frequency response, at a size and cost that is more reasonable. Fro, some aspects the second transformer could be regarded as a better quality job than the first, but . . .

At first glance, this may not seem to be a very serious loss. If you make the measurement at 47 watts on the secondary, you may correctly assess its true value. But unfortunately, output tubes to give 50 watts quickly run into distortion when they are pushed to a higher level. The distortion characteristic is similar to that shown at Fig. 3: the distortion at the 53 watts required to give 50 watts from a 95 per cent efficient transformer may by only 0.5 per cent; but to get the almost 56 watts needed for a 90 per cent efficient transformer, the distortion may rise to 2.5 per cent, or even more. So, if the measurement is made only at the 50 watt level measured on the secondary, the impression can easily be obtained that the second output transformer is considerably increasing the distortion, as compared with the first one. 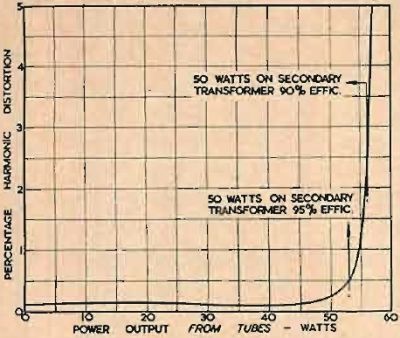 Fig. 3. Typical distortion characteristic of amplifier, plotted in terms of the power given by the tubes, to illustrate how use of transformers of differing efficiency can change the distortion at rated maximum output quite drastically, because the tubes also have to supply the transformer losses.

Unfortunately also, many people place considerable stress on getting the full value of wattage stated, within the rated distortion limit. If the output is stated to be 50 watts at 0.5 per cent distortion, than an amplifier is cinsidered to be seriously lacking if it only delivers 48 watts with 0.5 per cent distortion, and runs up to 2 or 3 per cent distortion when the output is pushed to 50 watts. This viewpoint can be seriously detrimental to an assessment of transformer quality, when the only deficiency in the transformer is that it is slightly less efficient: it introduces a loss of 0.5 db, or mayby even less, instead of the original 0.2 db.

At the low-frequency end of the response, an output transformer causes distortion due to saturation of the core, which causes a nonlinear magnetizing current. This at one time was always true. But in recent years, with modern magnetic materials, and with some methods of operating tubes, the statement needs modifying, as we shall see. First let us see how we measure the low-frequency waveform of the transformer itself, and what kind of results we get.

In Fig. 4, (A) shows the arrangement for measuring the magnetizing current in a simple transformer by means of an oscilloscope pattern. Resistor R should be chosen so its voltage drop is a small fraction of that across the transformer winding, so the voltage of the winding is also close to sinusoidal. As full line voltage will probably be not enough to produce saturation in the promary of an output transformer the secondary winding should be used for the test, leaving the primary oper-circuited and taking care not to get too near the open ends, which will produce a prohibitively large a.c. voltage.

It is important to take care which way round the Variac is connected to the line and also to see that the ground side of the scope does not return to the line ground, because, in these measurements, the scope ground is returned to a floating point between the resistor R and one side of the transformer winding. So take care to avoid having more than one ground point and also avoid metal-to-metal contact between the scope case and other grounded chassis. 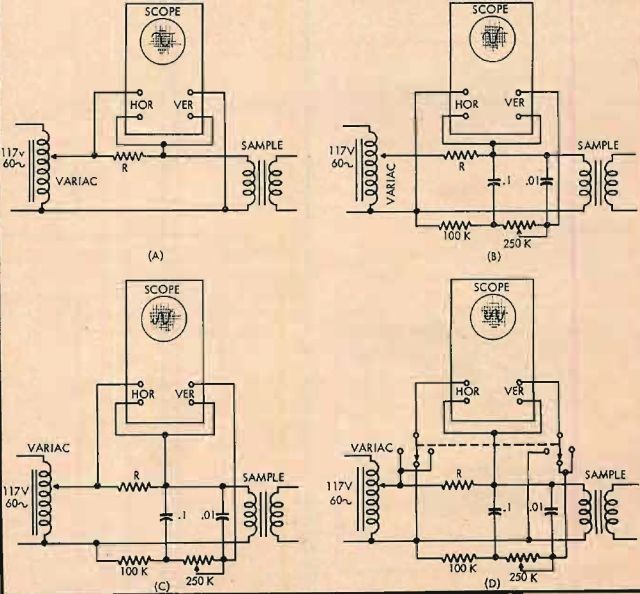 The type of trace that the arrangement of (A) Fig. 4 gives when the core begins to go into saturation is shown at (A) in Fig. 5. The voltage applied to the vertical plates is approximately sinusoidal while the horizontal voltage follows the magnetizing current waveform, shown separately against a conventional time base at (D) in Fig. 5. 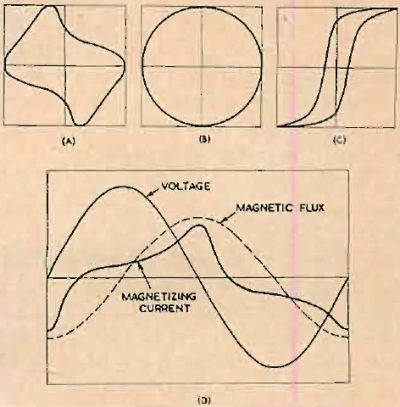 Fig. 5. Traces associated with core analysis: (A) magnetizing current horizontal with voltage vertical, using nearly sinusoidal voltage waveform; (B) circular pattern to check for 90-deg. phase shift in voltage display; (C) hysteresis loop obtained by 90-deg. shift on vertical plates; (D) waveforms displayed by normal time base, corresponding to the patterns of (A) and (C). Magnetic flux is shown dotted, because this cannot be displayed directly.

With a little adaptation, the circuit can be made to display the well-known hysteresis loop for the transformer core. The necessary changes are illustrated at (B) and (C) in Fig. 4. When a sinusoidal voltage is used the magnetic flux in the core is also sinusoidal, but displaced 90 deg. from the voltage it induces. So, by introducing a 90 deg. phase shift in the vertical deflection, we can produce a hysteresis loop.

First we have to set up the 90-deg. phase shift. To do this, the components shown at (B) in Fig. 4 are added and the 0.25-megohm variable resistor and the scope gain controls are adjusted to obtain the circular trace of Fig. 5. Then without altering the setting of the 0.25-meg. resistor, change the circuit to the arrangement of C in Fig. 4, when the hysteresis loop shown at (C) in Fig. 5 will be displayed.

This setting will give the hysteresis loop at 60 cps, and its behavior at different levels can be observed by turning the Variac up and down. However, to arrange the setup so that this procedure can be repeated at different frequencies, the switching arrangement of (D) in Fig. 1 can be included, which provides for making the connections shown at (A), (B) and (C) of Fig. 4 in quick succession. The Variac should then by fed from a high-power amplifier that deliver the necassary voltage without waveform distortion at the frequencies required.

If you switch the scope back to regular time base, which means the horizontal input is then disconnected and the vertical is displayed against time, the wavefors shown at (D) in Fig. 5 can be obtained (except the magnetic flux waveform, because there is no means of measuring this). Although these waveforms can be displayed there is no simple means of identifying the relative phase. This is the advantage of using the loop kind of display shown in Fig. 5 at (A), (B), and (C).

All of these displays use at least an approximately sinusoidal voltage waveform. Distortion occurs because the voltege departs from the true sine wave. This happens because the distorted current waveform is drawn from the source resistance that produces a volt drop. In the arrangement of Fig. 4 we used the Variac and the low value of resistor R to maintain an approximate sinusoidal voltage by avoiding this voltage drop. But in practical amplifier circuits the plate resistance of the output tubes does not allow this condition.

A pentode is virtually a "current" source, so swinging to the other extreme for a moment, we could assume that the current is sinusoidal, as represented at (A) in Fig. 6. In this case the magnetic flux will be determined from the hysteresis loop and the voltage, in turn, is produced by the rate at which the flux varies at any instant. The waveforms produced are shown at (A) in Fig. 7. Current and voltage can of course be displayed on the scope, but the magnetic flux we can only deduce. 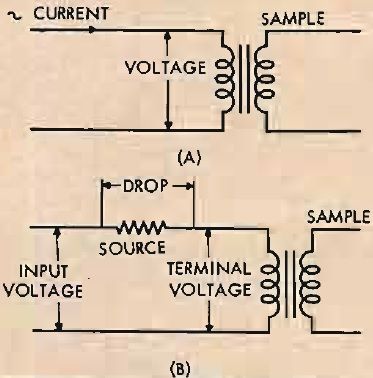 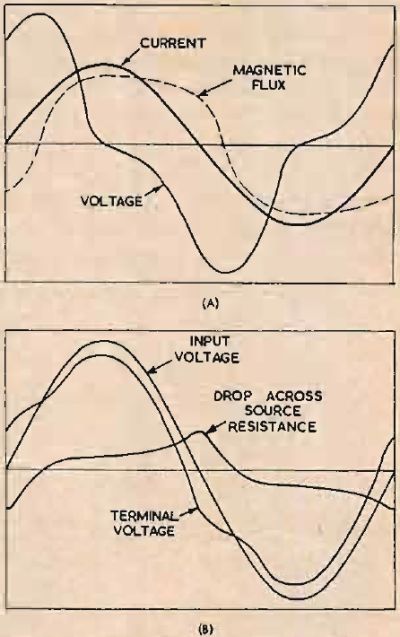 Fig. 7. Waveforms in different practical circuits: (A) with a pentode or high resistance source, the current is sinusoidal; (B) with a lower source resistance, these waveforms are typical.

These waveforms apply approximately to a pentode output stage without feedback. When feedback is used, the voltage waveform gets fed back over the whole amplifier so as to "correct" the current waveform, which then is no longer sinusoidal.

(B) in Fig. 6 shows how we can simulate the conditions for triode amplifiers. The input voltage, which is sinusoidal, can be regarded as the open-circuit voltage at the plate. This input voltage is that applied to the grid multiplied by the amplification factor of the tube. The source resistance corresponds with the tube plate resistance and because of the drop in this source resistance, due to the current drawn by the transformer winding, the terminal voltage will differ from the output voltage, as shown at (B) in Fig. 7.

Notice that the terminal voltage comes much nearer to being in phase with the input voltage than the phase relationship between voltage and current at (A) in Fig. 7.

From this brief discussion it becomes evident that the magnetizing current and terminal voltage of a transformer cannot both be sinusoidal. In practice both of them depart from a true sine wave in shape and a certain amount of distortion results.

Another Kind of Low-Frequency Distortion

The second kind of distortion that can occur at low frequencies is not directly due to the waveform of the magnetizing current at all. The transformer may operate well within the saturation limit, but the inductance only represents a reactance of, say, twice that of the load resistance. This will result in about 1 db loss at this frequency and also will cause the load line on the tube characteristics to open out into an ellipse. In this case the distortion present will be due to the elliptical load line rather than to the nonlinearity of the transformer magnetizing current.