The 6CZ5, a new RCA miniature power tube, holds much promise for the art of audio power amplification. This tube is not to be confused with the 6AQ5, or English 6BQ5, both of with it resembles in construction and purpose. It is not interchangeable with them.

It has the same filament, plate and screen, and load characteristics as the 6V6, of which the 6AQ5 is the miniature type, and costs about the same. However, the other characteristics are different and provide a considerable improvement over tha latter types. The negative bias on the signal grid and the transconductance are about 15 per cent greater and the power output about 20 per cent greater for a plate voltage of 250. In push-pull operation the 6CZ5 resembles the 6L6 in that it generates a low percentage of odd harmonics and can be operated as a pentode with a plate voltage of 350. Under this latter circumstance and with 280 volts on the screen, a bias of -23.5 volts on the signal grid, and a plate-to-plate load of 7500 ohms, two 6CZ5's are rated by the manufacturer to deliver 21.5 watts of audio power and with only 1 per cent of harmonic distortion.

This adds up to lower supply requirements, lower distortion, lower all around cost, and higher power output. To try a pair of 6CZ5's the writer built an amplifier from parts in the junk box including a husky output transformer which was manufactured about 20 years ago. To avoid expense in obtaining good voltage regulation, the writer used a large bleeder and worked the amplifier half way between the recommended pentode and the lower-plate voltage tetrode operation. With 325 volts from plate to cathode, the results proved better than expected. The plate voltage did not vary from minimum to maximum power output, and total variation of the screen voltage was only 3.5 per cent.

Figure 1 is a schematic of the amplifier as constructed. If it is desired to operate the amplifier in accordance with the manufacturer's specification - that is, at 350 volts from plate to cathode - the 100-ohm resistor R14, in the first filter section of the plate supply should be shorted. It would also be necassary to replace 5Y3 rectifier with a 5U4 and to increase the size of the step-down resistor R11 to 1500 ohms. Plate and screen voltages under these conditions will vary somewhat with the power output. 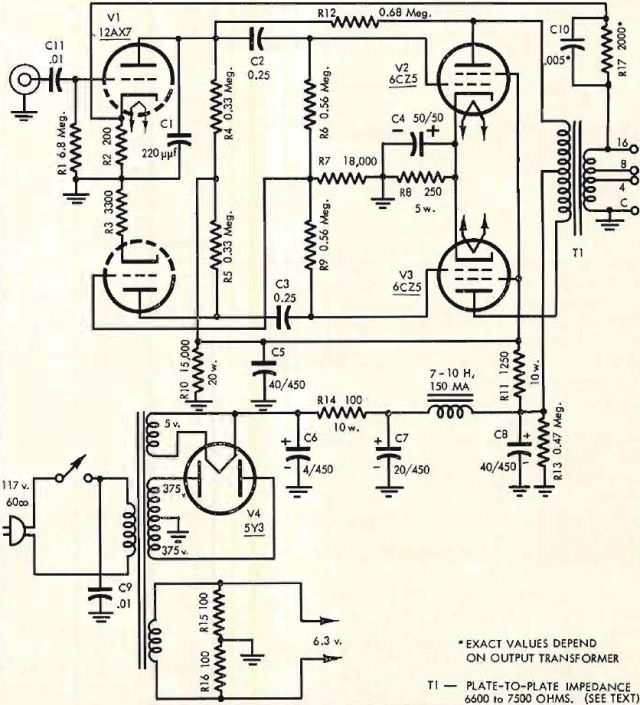 Fig. 1. Schematic of the 6CZ5 amplifier
(To see the enlarged diagram, copy the drawing and paste it into any graphics program)

To obtain similar results it is necessary that the output transformer have a large iron core and that the windings have low d.c. resistance. The one used weighed about 4 lbs. and had a total primary resistance of 225 ohms. Both Triad S-60A and Staneor A-3801 should be suitable. For the ultimate in high fidelity either Triad S-146A or Staneor A-8056 should be employed. The reflected impedance of these transformers is 6600 ohms, which is close enough to the required 7500 ohms to cause only a slight loss of power output.

The characteristics of the 6CZ5 lead themselves to Ultra-Linear operation, and for this either the Triad S-146A or the Aerosound TO-310 would be appropriate. For such operation 350 volts should be applied to the plates. This can be obtained by omitting the bleeder circuit (resistors R10 and R11, and capacitor C5).