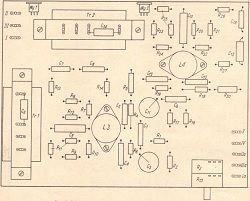 Here is a description of the construction of a stereo amplifier intended for cooperation with a stereo turntable. The amplifier has two channels: left and right. Each channel consists of an input stage, volume and balance controls, and an output stage. In the input stage, the weak signals from the turntable are pre-amplified, as well as the correction of the frequency characteristics of the reproduced recordings from gramophone records by appropriate raising or lowering of bass and treble. The volume control system allows you to continuously change the sound strength of recordings, while the balance control allows you to equalize the playback volume of both channels. The output stage is no different from a similar mono amplifier stage.

Taking into account the design, the amplifier has been divided into 3 parts:

The individual elements of the system are mounted on separate bakelite plates, thanks to which experimenting with the system is very easy.

The circuit includes two levels of voltage amplification in each channel and a tone control system, separately for low and high tones.

The schematic diagram of the system is presented in Fig. 1. Both amplifier channels are the same and therefore it is enough to describe only one of them. The input from the stereo turntable passes through the standardized input jack [We] and the coupling capacitor C1 to the sound level controller R1, and then through the capacitor C2 to the tube control grid L1a. The grid leakage resistor is 1MΩ. There is a resistor R6 in the cathode circuit of the electron tube to generate the grid bias voltage, blocked by the capacitor C4. The signal amplified in the anode circuit is fed through the resistor R4 and the capacitor C6 to the tone control system. So that the treble is not weakened too much, the R4 resistor is bypassed by the C5 capacitor. In the first amplification stage, there is furthermore a feedback between the anode and the grid of the tube L1a (resistor R5). Due to this coupling, a more linear transmission characteristic and a lower coefficient of non-linear distortion are obtained. 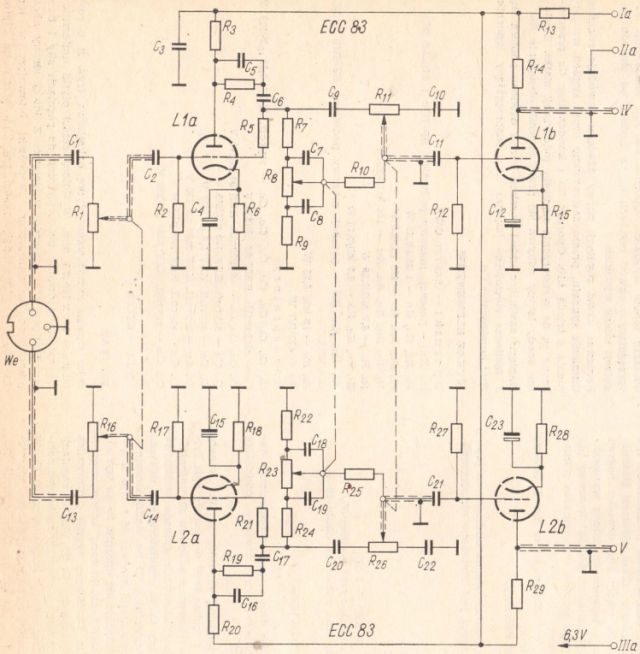 The tone control system consists of two RC circuits. The first circuit includes elements R7R8R9C7C8 for bass adjustment, and the second circuit (C9R11C10) allows the treble response to be changed. The R10 resistor decouples the bass control circuit from the treble control circuit.

As the tone control circuit causes significant signal attenuation, a second gain stage with the L1b triode is used. Resistor R15 and capacitor C12 are designed to create a grid bias voltage. The triode anode is supplied through the R14 load resistor.

The supply voltage for the tone correction system is taken from the power supply through a decoupling filter (resistor R18 and  capacitor C3).

A bakelite plate (figure 2) with dimensions of 150 × 100 × 2mm was used as the chassis. At the bottom of the PCB there are double potentiometers to adjust the sound level and tone, and an input socket. On the left side, next to the potentiometers, there are soldering tips in such a way that they correspond to the correct terminals on the mounting plate of the power output amplifier. The capacitor C3 is attached to the top of the board. The vacuum tube sockets with shielding cups are located in the center of the mounting plate. Capacitors and resistors are placed vertically and horizontally on the remaining free places on the board. 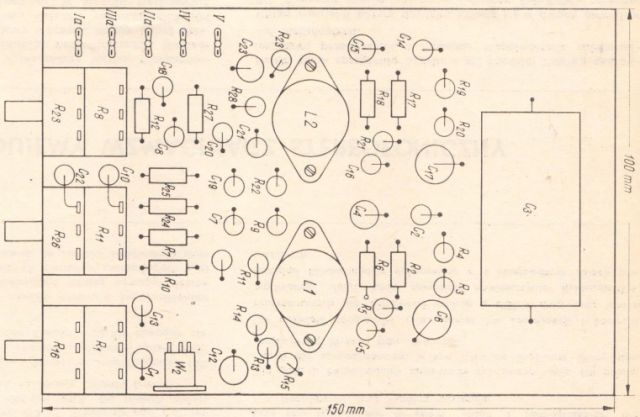 The system was assembled using the pseudo-printing method. It consists in the fact that in the bakelite plate, 1.6 mm diameter holes are drilled in appropriate places (marked with dots in the drawing), into which the ends of resistors and capacitors are inserted. On the opposite side of the board, these ends are soldered to each other or pieces of assembly wire.

The power output amplifier consists of a voltage gain stage and a power stage, and a balance controller. The schematic diagram of the amplifier is shown in Figure 3. Here we will also limit the description of the circuit to only one channel, because the other is identical. 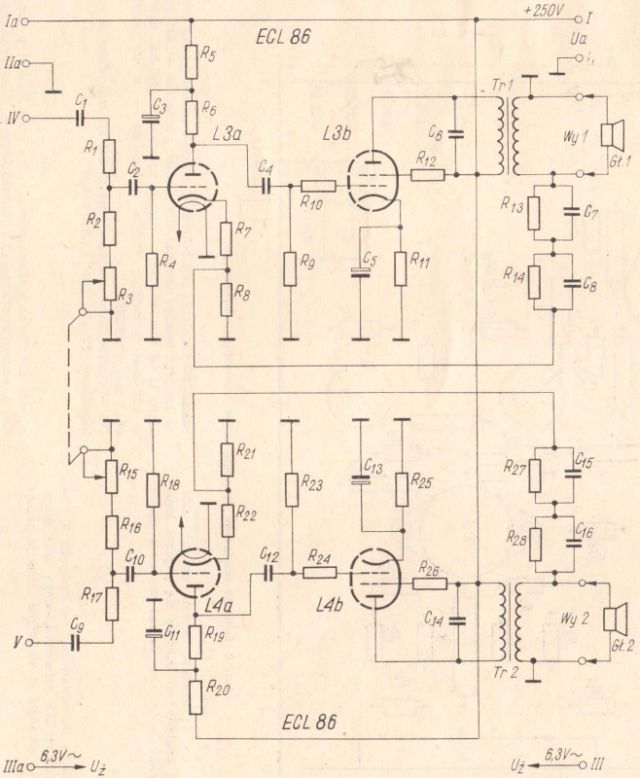 The input signal is fed through the capacitors C1C2 to the control grid of the tube L3a, which operates in the preamplifier stage. Between these capacitors there is a balance regulator R3, which, together with resistors R1R2, is a voltage divider. The divider is designed in such a way that at the left extreme position of the slider in the balance controller (coupled potentiometers R3R16) the signal in the first channel is attenuated by about 12dB, and in the second channel it is amplified by about 12dB. At the right extreme position of the slider in the balance controller, the opposite state is obtained. The intermediate positions make it possible to equalize the playback volume of both channels. In this way, the correct arrangement of the hearing direction of the phantom sound sources is achieved by means of the balance adjuster.

In the anode circuit of the L3a tube there is a resistor R6 and a filter consisting of a resistor R5 and a capacitor C5. The filter is used to decouple the power stage with the L3b tube from the pre-amplification stage. Then, through a coupling capacitor C4 and a resistor R10, which prevents the formation of high-frequency oscillation, the amplified input signal goes to the control grid of the vacuum tube L3b. In the cathode circuit of the electron tube there is a resistor R11 to generate the bias voltage and a capacitor C5 connected to it in parallel. The L3b tube anode is powered from the primary winding of the output transformer Tr1.

The bandwidth transmitted by the amplifier, given at the beginning of the article, was obtained by introducing a number of additional elements into the system. One of them is the capacitor C6 connected in parallel to the primary winding of the output transformer. Others include RC circuits located between the secondary winding of the transformer Tr1 and the cathode circuit of the L3a tube. This creates a voltage feedback. We also have a current feedback here, because the R7R8 resistors have not been bypassed with capacitors.

All the elements of the power output amplifier (except the loudspeakers) are attached to a bakelite plate of 200 × 150 × 2mm. In order to avoid undesirable couplings in the system, it is recommended to arrange the elements according to the assembly diagram shown in Figure 4. 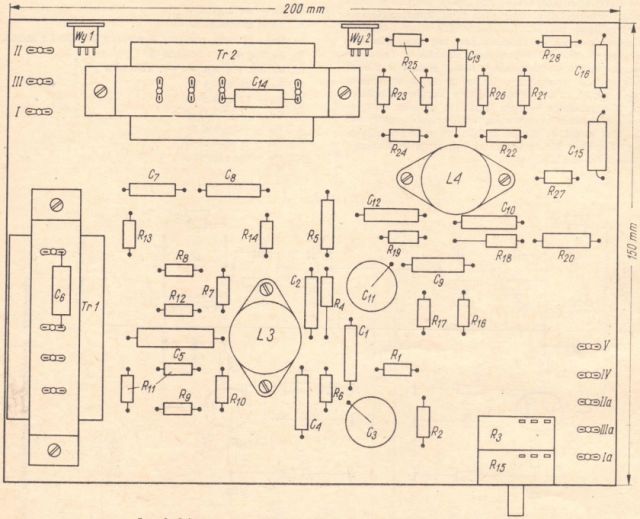 The assembly of the amplifier is also performed by the pseudo-printing method. The supply voltage is provided through soldering tips located on the left edge of the mounting plate.

The schematic diagram of the power supply is shown in Figure 5. The power supply consists of a full-wave rectifier and a filter. The selenium rectifier in the bridge circuit rectifies the alternating voltage from the secondary winding of the Tr3 mains transformer. The power supply filter contains a choke and two electrolytic capacitors. The filament of the amplifier electron tubes is supplied from a separate winding on a transformer.

The assembly of the complete amplifier can be realized on the basis of various design solutions, the simplest of which is to attach the three mounting plates to the aluminum sheet chassis. These plates can be screwed directly to the chassis, after cutting rectangular holes in it. For a 150 × 100mm tile, the cut should be 142mm long and 92mm wide, while for a larger tile - 142mm and 192mm. The point is to ensure access to the boards also from the bottom, where the cables connecting the individual elements are located. It is recommended to arrange separating elements made of sheet metal between the plates. Such walls shield one stage of the amplifier from the other. Connections between individual boards are made with a rigid insulated wire, the sections of which are soldered to the appropriate soldering terminals on mounting plates, as shown in Figure 6.

Fig. 6. The way of connections of individual sections of the amplifier

Another design solution is to place the chassis in a housing consisting of a front plate and a cover. In this case, all control elements, switches and input and output sockets are removed from the plates and screwed to the faceplate. The cables connecting the level and tone controls and the input socket should be shielded. The cover made of thin sheet metal should be provided with ventilation holes for better heat dissipation from the heating parts of the amplifier.

Place the speakers in wooden housings and connect them with cables to the amplifier's output sockets.