Triode as an output tube

Triode as an output tube

The issue of the power stages with the pentode was considered in the previous article (Tube in the amplifier output stage). It boiled down to the proper adjustment of the loudspeaker's resistance, using a loudspeaker transformer, to the type of speaker pentode used. The formula for the optimal anode resistance for the pentode is extremely simple, namely:

Ra - means optimal anode resistance, Uao - constant voltage of the anode rectifier or anode battery; Iao - the anode current which flows through the tube, and whose value is set by the appropriately selected grid voltage of the tube. It should be noted that when setting the steady state current Iao of the output tube we are guided by its admissive power. The pad is, the power that the tube can still convert into heat in the anode without harm to itself. The current of Iao depends on the admissive power of the Pad and the voltage Uao. Its value is determined from the formula:

For example, for the AL4 speaker pentode we have Pad = 9W. Thus, at the voltage of the rectifier Uao = 250V results:

i.e. current Iao = 36mA. This value is usually given in tube catalogs as well as anode voltage Uao = 250V.

Having given the anode voltage Uao and the anode current Iao for a given pentode, we can determine the optimal resistance for this tube from formula (1). In our case, we will receive:

On the other hand, in order to match the tube the loudspeaker resistance Rg = 5hom, and thus transform its value from 5ohms to 7000ohms, we must use a loudspeaker transformer with a turn ratio that we calculate from the formula:

With the transformer turn ratio selected in this way, the resistance of the speaker Rg = 5ohms will be seen by the tube as resistance Ra = 7000ohms (here we refer to the resistance for alternating currents, i.e. for acoustic currents that overlap the anode constant Iao during operation). The tube will give off the optimal anode resistance at full control with its maximum acoustic power. It is easy to find out through the following simple reasoning. At full current control, anode current fluctuations may have an amplitude not equal to the anode constant constant Iao or Ia = Iao. According to Ohm's law, current fluctuations with amplitude Ia cause Ra anode voltage fluctuations with an amplitude Ua = Ia.Ra. In our case, for Ia = Iao = 36mA and Ra = 7000ohms we get:

Thus, we can see that by choosing the resistance of the tube equal to the optimal resistance - at full current control of the tube, we obtain the full voltage utilization of the tube at the same time (the amplitude of anode voltage fluctuation equals the Uao constant voltage component). It follows theoretically the maximum usable power that we can get from the pentode working in the A1 class, namely:

In practice, however, it is impossible to drive the tubes so deeply. Current and voltage fluctuations have a lower amplitude than the anode current and anode voltage at steady state. As a result, the maximum efficiency of the pentode with an optimal fit is at most 40%, as shown in the pentode characteristics in the previous article. From the AL4 loudspeaker pentode, whose admissive power is Pad = 9W, you can therefore obtain the optimal anode resistance of Ra = 7000ohms in the useful (acoustic) power of:

Let's see now what is the issue of proper use of triode as an output tube working in class A without grid current, i.e. in the so-called A1 class. As for the correct setting of the anode current in the steady state of the tube, we follow the same premises as in the pentode, i.e. we use possibly the highest prescribed for a given type of tube catalog data anode voltage. For example, let's take the AD1 speaker triode. The prescribed anode voltage for this tube is Uao = 250V. Admissive power Pad = 15W. From these data we can determine the maximum Iao idle current:

Fig. 1 shows the anodic characteristics of the AD1 tube, drawn with the hyperbola of the admissive power Pad = 15W. 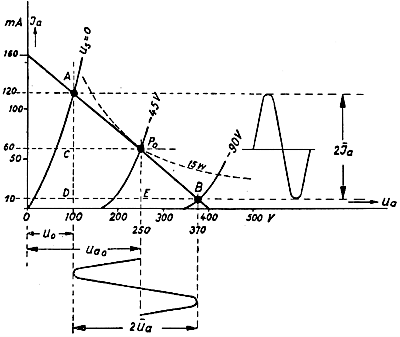 In order not to obscure the drawing, only three anodic characteristics were drawn. The zero characteristic (Us = 0), the characteristic passing through the starting point of operation Po (Us = -45V) and the characteristic for the negative grid voltage Us = -90V. The starting point of the tube operation lies at the intersection of a vertical straight line plotted from the point Uao = 250V on the voltage axis, with the hyperbolic curve. Leading the point Po straight horizontal line up to the intersection with the current axis read the value of the quiescent current Iao = 60mA. Next, we search among the family of anode characteristics of the tube that characteristic which passes through the point Po and read the negative grid voltage, which responds to this characteristic. In our case, this is a characteristic for the voltages Us=-45V. Such a large negative voltage must be applied to the grid of the AD1 tube, so that at an anode voltage of 250V you can obtain the anode current Iao = 60mA. The next step is to determine the working line corresponding to the optimal resistance of the tube. The straight working line must pass through the idle point Po. In addition, the slope of this line in relation to the horizontal axis must be chosen so that the power received at the anode resistance during the maximum control of the tube was the largest. To find the optimal slope of the working line, we reason as follows.

When the tube is fully controlled, the grid voltage can only vary from zero to -90V. It results from the fact that during the work of the tube for constant voltage Uso=-45V, an alternating voltage with the amplitude Us is applied. Thus, the grid voltage of the tube oscillates between the peak values: Uso+Us and Uso-Us. If we do not want to exceed the zero voltage of the grid and work only in the range of negative grid voltages (in order to avoid grid current), then the maximum amplitude of the Us can be at most equal to the Uso voltage constant component: Us=Uso.

In this case, the peak values of the grid voltage will be respectively Uso+Uso=2Uso and Uso-Uso=0. In our case Uso=-45V. This corresponds to 2Uso=-90V and 0V.

With loudspeaker pentodes, this case is much more advantageous than with triodes. This is due to the fact that all the anode characteristics of the pentodes come out from the zero point of the coordinate system and run, with small anode voltages, steeply up close to the current axis Ia. This is why the residual voltage ua for pentodes is usually small and can be omitted entirely in approximate calculations. This can not be done for triodes. We will now see what happens when the grid voltage of the AD1 triodes decreases from Uso=-45V to Uso=-90V. The working point then moves from point Po to point B along the working line (loadline). The anode current decreases to the residual value ia=10mA, while the anode voltage Ua increases to the peak value Ua=370V. If the triode's characteristics were shifted perfectly parallel to one another at equal intervals, the point B would fall at the end of the working line and lie on the axis Ua. However, since there is a density of the anode triode characteristics at large negative grid voltages, point B lies not at the end of the working line, which results in incomplete tube control and causes some asymmetry of both anodic current amplitudes. As a consequence, some distortions to the AC amplitude arise. Tubes can not be considered a completely linear element with its deep steering. Such distortions are also known as nonlinear distortions. The fight against these distortions is a separate important issue of radio technology, which will be discussed in later articles.

Having the designated working line we can determine the optimal resistance for a given tube. The magnitude of this resistance results from the slope of the working line to the Ua axis. From Ohm's law, resistance is calculated as the ratio of voltage to current. Because we are talking about resistance to variable waveforms, we take the ratio of voltage amplitudes and anodic alternating current. The drawing shows that the positive amplitude of the anode current is equal to the AC section. On the current scale, read off Ia=AC=60mA. The amplitude of the anode AC current corresponds to the amplitude of the CP anode voltage. It is equal to the difference between the idle Uao voltage and the residual voltage ua.

Therefore, the anode resistance corresponding to the given working line equals:

This is the optimal anode resistance for a given type of triode. With the anodic resistance chosen this way, it is easy to calculate the maximum usable power that can be obtained from the AD1 tube. We calculate the usable power as the product of the effective value of anode current (variable component) and anode voltage or half of the product of current and voltage amplitudes:

Similarly, we obtain the average value of anode voltage amplitude as half of the DB section, ie:

The useful anode power obtained from the AD1 tube will therefore be, according to formula (5):

Looking closely at the equation (3), we see that it resembles a pattern on the surface of a right-angled triangle with sides Ua and Ia. If both the amplitudes (positive and negative) of the current and voltage were equal, the surfaces of the triangles ACP and PoEB would also be equal and the surface area of each of these triangles would be equal to the useful power emitted by the tube during operation. Therefore, the triangles ACP and PoEB are called power triangles. The average useful power is the arithmetic average of the surface of both triangles. It can be calculated from the triangle of a large ADB by dividing its area by 4. We have a dependence:

To take the most from the output tube it is necessary to:

The determination of the proper operating conditions of the tube and optimal anodic resistance takes place in the manner shown in Fig.2.

With the optimum operating conditions chosen in this way, the useful power that we can get from the tube depends on the admissive power of the tube and is higher for the pentode than for the triode.

For the pentode, the maximum usable power in the A1 class is about 40% of the admitting power of the tube, while for the triode only 20% of the admission power. These are, of course, indicative values. It is possible to calculate the useful power of the tube in given operating conditions based on the power triangle plotted on the grid of the anode characteristics of the tube.

The sound power (useful power) of the tube can in no case be more than half the power consumed by the tube from the rectifier or anode battery.

and by j the current control factor of the tube, as the ratio of the amplitude of the anode current Ia to the constant current component Iao:

With this designation, the formula for the useful power of the tube will be transformed as follows:

As can be seen from this formula, the efficiency of the tube depends only on the current control j and the voltage utilization h.

Since these coefficients can not exceed one in A1 class, the tube's efficiency can not be greater than 0.5, or 50%.