Low-frequency amplifiers play an important role in amateur radio practice; they are found almost everywhere. However, the design and manufacture of the amplifier itself is not very easy. The biggest problem is choosing the right capacitors and resistors so that the system works flawlessly and shows the smallest possible percentage of distortions with the appropriate amplification. The simplest and, at the same time, the cheapest one is an amplifier with resistance-capacitive coupling. For the use of radio amateurs, a number of tables are provided, which are not difficult to use. Having the tube we want to use in the low-frequency voltage gain stage, we search the tables (for this type of tube) for the values of the remaining elements of the amplifier. It also lists the circuit gain K, the percentage of distortion at the Z output, and the voltage that is needed to design the next voltage gain or power gain stage.

The tables presented are prepared for most of the tubes for triodes and pentodes, respectively. It should be remembered that the given sizes of coupling capacitors Cs and blocking Ck, Ce are the smallest values that can be used. Their values can only be rounded towards the higher values. If the values of cathode capacitors are not given, a capacity of several to several dozen microfarads should be used. All symbols given in the attached tables have been marked on the general diagrams so that they do not need to be discussed in a special way.

In the event that the tube stated is not a single triode but incorporates two systems, such as a double triode, a triode with a diode etc., only the single triode system should be considered. The other systems can be used independently of each other. This also applies to pentodes. 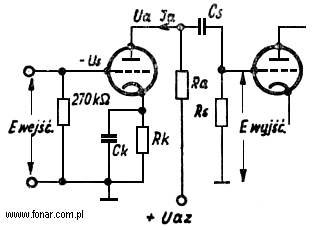 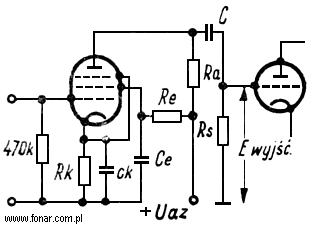