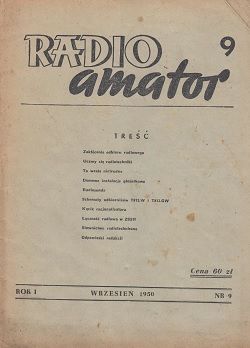 The presented diagrams show two popular radio receivers type T813.W and T813.GW.
The first of them, T813W type, is powered by alternating current, and the second - T813GW - by alternating or direct current from the lighting network. Receiving parts of radio receivers are assembled according to the same diagram. These are "simple", three-range, single-circuit receivers.
The T813W receiver has an AF7 electron tube, which acts as a detector, and an AL4 radio speaker tube.

In the T813GW receiver the detector tube is VF7 and the speaker tube is VL4. 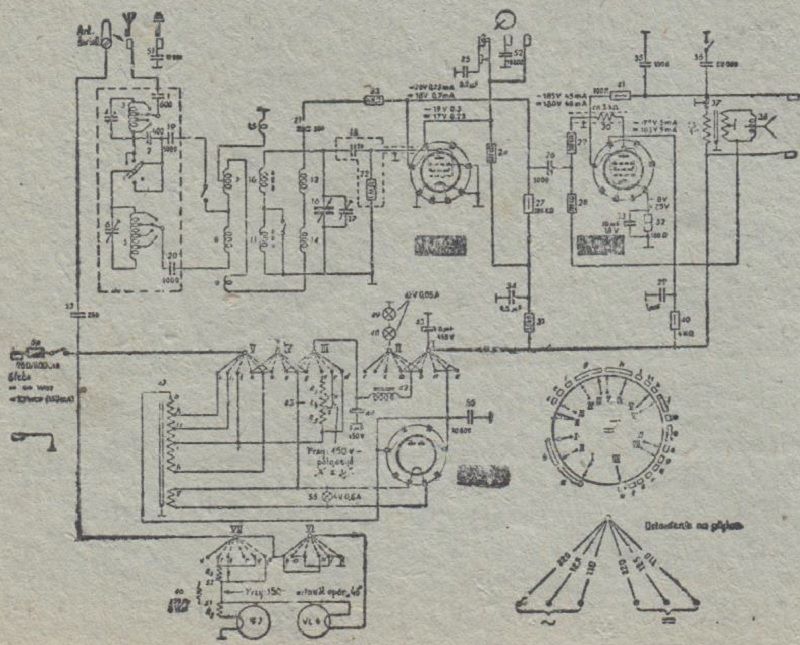 Both receivers use the same rectifying electron tube - AZ1. Both receivers have sockets for connecting a turntable, apart from the type, the T813W device has a switch that allows to reduce power consumption from the lighting network when listening to a strong local station.
Likewise, both receivers have permanent eliminators to eliminate interference in reception caused by the strong local station program. The setting of the waveband switches is adapted to receiving long waves.
The presented diagrams also show the voltages and currents (for both types of power supply) that should be in the individual circuits of the receiver. Knowledge of these values should facilitate the repair of the receiver.
The diagram of the radio receiver T813GW shows the connections of contacts on the board of the network switch for easier orientation during its repair.

"The struggle for lasting peace, for the victory of fraternal coexistence among nations - is the most important task of the present generation. No one should doubt the final victory of this struggle, because the peace movement has become a movement of hundreds of millions of people today, and the ranks of active peace defenders are growing steadily. Nothing can stop the growth of this movement, because it is a movement for truth and justice in human relations. The strength of this movement is also based on the ever-increasing strength of nations liberated from capitalist violence, led by the mighty Soviet Union, led by the great peace standard-bearer Generalissimo Joseph Stalin. The Polish nation joins this fight for peace completely and with an unchanging will to win".
In these words delivered on September 2 this year to the delegation of the First Polish Congress of Peace Defenders - Bolesław Bierut, the President of the People's Republic of Poland, included the content of the struggle for peace waged today by the whole world. This was also the content of the session of the Warsaw Congress.

Industrial disruptions.
Contrary to atmospheric disturbances, the influence of which on radio reception is so strong that it often forces the device to be turned off and which almost cannot be avoided (see No. 6 of the magazine) - industrial disturbances can be effectively eliminated and can only be forced to abandon radio reception.
Interferences of this type are local in nature and come from electrical devices such as: AC and DC motors, vacuum cleaners, medical and hairdressing appliances, circuit breakers, etc. They most often manifest themselves in the form of tiring ear growling. Produced by the aforementioned devices - parasitic waves disrupting radio reception, they are most severe in large cities, industrial and health centers, where they create a "thick fog" which must be penetrated by radio waves sent into space by antennas of transmitting radio stations.

Cathode of electron tubes.
The basic electrode in any vacuum tube is the cathode. In order for the cathode to emit electrons, it must be heated to a relatively high temperature - several hundred or even over a thousand degrees. The cathode is heated with an electric, direct or alternating current. We have learned about two types of cathodes, namely direct heated cathodes and indirectly heated cathodes.
Direct-heated cathodes are usually made of tungsten wire, which in the case of small receiver tubes is usually activated by a track or bar, i.e. has an active layer of thorium or a layer of barium oxide on its surface in order to increase the emission efficiency of the cathode. The cathode wire on small receiver tubes is extremely thin. Its diameter is 10 microns, or 0.01 mm, while with high-power transmitting tubes whose emission reaches the value of 100 and more Amps, the diameter of the cathode fiber may be several millimeters..
...
Filaments for filing direct-glow electron tubes must be carefully suspended in the tube, and the finer the thinner the wire is. Usually, the cathode wire is suspended in one plane and it is in the shape of the letter "M" or the letter "V" inverted. The wire is suspended on springs, which is why it is subjected to a certain tension. This tension guarantees the suspension of the cathode in one plane and prevents the lateral warping of the wire during its heating due to thermal elongation of the wire. This ensures a constant distance between the wire and the anode or other electrodes in the tube (Fig. 1a and Fig. 1b).

Fig.1a gives an example of a battery tube cathode suspension with a low filament current, i.e. having a very thin wire, while Fig.1b refers to a direct-glow rectifying tube in which a nickel tape covered with an active oxide layer is used. Such a tube generally has a relatively high emission. Pure tungsten wires without an active layer are not used in currently manufactured types of receiver tubes.
...
Indirect-heated cathodes.

In the case of indirect glow tubes, as mentioned in the previous article, the actual cathode is electrically separated from the filament filament, which only serves to heat the cathode.
The cathode is usually a nickel pipe or a pipe made of a nickel alloy covered with an active oxide layer.
Inside the pipe there is a heater made of kaolin pipe with a tungsten wire heating coil. The presence of kaolin pipee, or made of other insulating material resistant to high temperature, causes high thermal inertia of the cathode, as a result of which cathodes of this type heat up very slowly. Sometimes 60 seconds elapse from the moment the voltage is applied to the normal warm-up of the vacuum tube.
Newer design electron tubes do not have a heater made of insulating mass. The heating wire is located directly in the nickel pipe, and to ensure good insulation it is coated with a layer of aluminum oxide. The time required for the cathode to warm up is thus greatly reduced. Fig. 2 shows, in large magnification, the cross-section of the cathode with indirect geating in the older design. 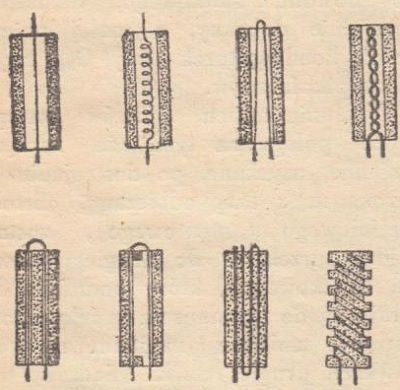 Indirectly heated cathode, due to its high thermal inertia, is particularly well suited for alternating current heating. Moreover, a great advantage of this type of cathode is that the electric potential is the same along the entire cathode. There is no such phenomenon of voltage drop along the cathode which occurs with filament cathodes directly due to the filament current flowing through the cathode. In this case, the cathode itself is insulated from the heating wire. The cathode nickel pipes forms the equipotential surface. Therefore, the causes of mains hum when glowing with alternating current are eliminated. In order to remove the influence of the magnetic field of the filament current flowing through the heating wire, both heating wires supply and discharge the current are twisted. Tubes intended for devices powered by alternating current are in most cases equipped with such indirect-filament cathodes. Another advantage of these electron tubes is that the cathode is stiff and is not subject to vibrations and elongation as easily as it is with direct filament cathodes. As a result, the grid of the tube can be placed much closer to the cathode than in older type tubes. This significantly improves the amplifying properties of indirect heated tubes. The only disadvantage of this type of vacuum tube is that they require more filament power than the so-called battery operated vacuum tubes. Earlier types of indirectly heated tubes required 4 watts of filament power. Currently, the same type of tubes are built with the filament power reduced to the average value of 1.26 watts.

Radio communication in the Soviet Union (7)

Radio - this wonderful invention that connects us with the wider world - is used not only to broadcast programs received by the owners of loudspeakers or tube cameras. Various messages, such as telegrams or messages, are also transmitted by radio. They are sent by voice, i.e. "phony", or Morse code using a buzzer. This type of work is subject to our post office, which organizes postal radio stations, which are in constant contact with each other.

How to read and understand radio diagrams.
Referring to the content from the previous issue of "Radioamator", we present a diagram of the eliminator in a series arrangement of the coil and the variable capacitor, and the method of its connection to the radio receiver.
...
Ribbon filters.
Modern radio receivers often use input circuits in the form of so-called "ribbon filters" or "spectral filters".

Assembly diagram of the 2-tube amplifier (12)

Due to the great interest of our Readers in the two-tube network amplifier described in issue 7 of "Radioamator", we present the assembly diagrams of this amplifier.
The pictures below show the connections inside and on top of the amplifier base. 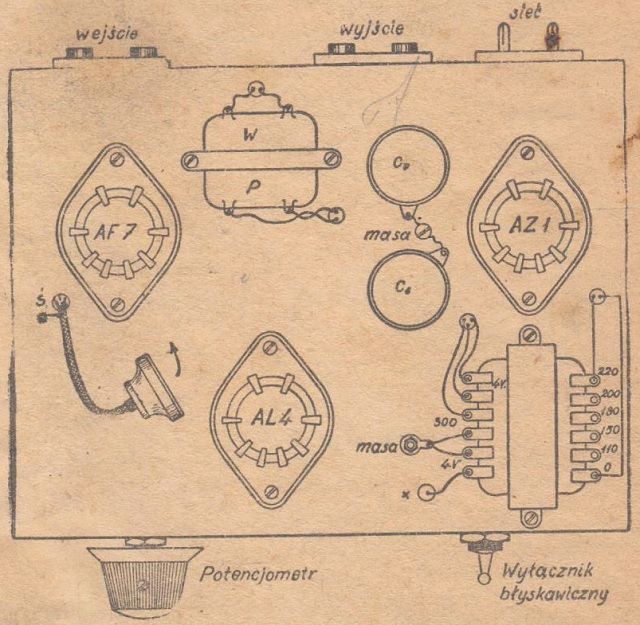 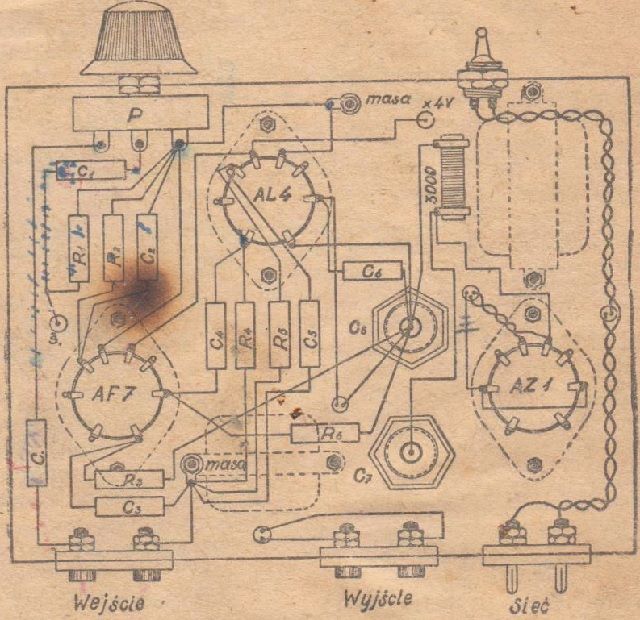 Dear colleagues!
We already have our magazine. Currently, we have a corner where we can share our experiences. I think that each of the amateurs, who have a lot of practice in this place, would like to share with novice colleagues their, maybe small but practical rationalizing ideas.

At our Soviet colleagues (12)

The Soviet people this year celebrated the 55th anniversary of the invention of radio in Russia as a great celebration of socialist culture, as an overview of achievements in all areas of Soviet radio engineering and radio amateurs...

In the rich program of radio broadcasts, one of the items concerning the meteorological report is repeated every day. Any radio listener could already tell that. The data on the expected course of the weather is of greater - than it seems - importance. They are not only intended to satisfy our curiosity and remind us to bring our umbrella or coat from home; they primarily serve the needs of air transport, shipping and agriculture.