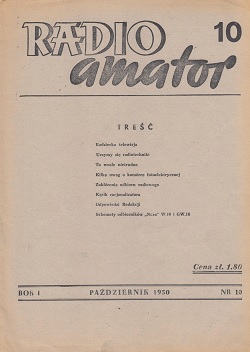 The diagrams below show connections in receivers manufactured by 'Nora' of the "Tosca" "W16" and "GW16" types. Both receivers are two-tube with a third rectifier, two-range (medium and long waves) and belong to the category of simple devices. They have the same receiving frequency, but they differ in the method of supplying electricity and the types of tubes. The "Tosca" "W16" receiver is powered by alternating current from the lighting network and has the first AF7 type tube that acts as a detector. The second - is a loudspeaker type AL4 The AZ1 rectifying tube works in an anode power supply. 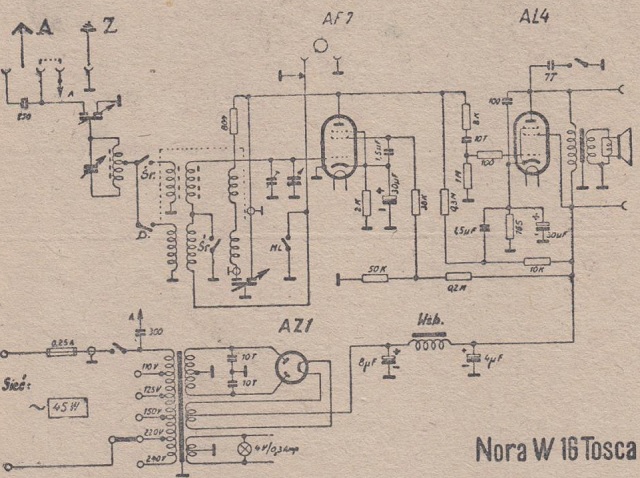 The "Tosca" "GW16" receiver can be supplied with alternating or direct current from the lighting network. It has receiver tubes that correspond to the types of electric tubes in the first camera, i.e. detector - CF7 and speaker - CL4. The power supply uses a CY1 rectifying electron tube and the "Urdox" U920 current regulator. 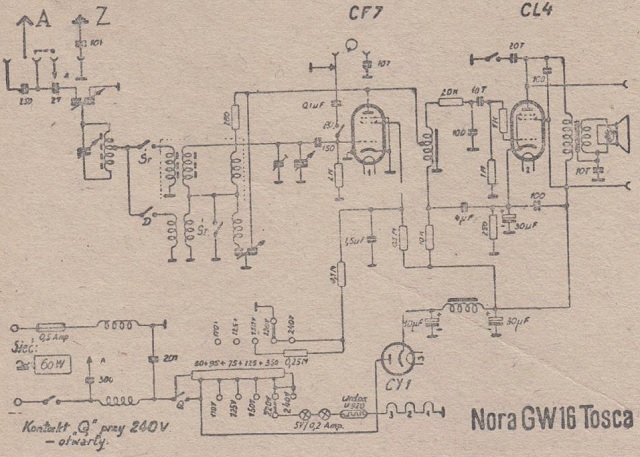 Both devices have volume control and selectivity control, which is achieved by changing the capacitance of the differential capacitor located in the antenna circuit. They also have built-in eliminators, which allow for clear reception of foreign stations, undisturbed by local radio broadcasts. The timbre of the sound is regulated by switching on and off the appropriate permanent capacitor located in the anode circuit of the loudspeaker tube. Both devices have identical boxes.

In 1922, when a radio broadcasting station in New York had a power of less than 1.5 kW, a 12 kW transmitter was built and put into operation in the Soviet Union. In the same year 1922, the Soviet Union took the first place in the world in terms of the power of transmitting stations, ahead of other countries' radio technology, which often drew on the experience of Soviet engineers. For example, in the words of the Americans themselves, the Soviet system for building super-powerful transmitters was used to build a 500 kW station near Cincinati. A modulation system developed in the USSR was also used in the New York TV transmitter.
Excellent results were achieved in the Soviet Union and in the field of television.
The theoretical foundations of television were prepared in 1888 - 1890 by many Russian scientist, physicist A.G. Stoletov, who studied the effect of light on the electrical conductivity of gases and constructed the world's first photoelement.
...
The rise of the technical and economic power of the Soviet Union, the achievements of Soviet science created the conditions for a jump in the development of Soviet television from the standard of 343 lines to 625 lines, which was ahead of Europe (405) and America (525 lines).
The transition of the Moscow TV station to a new standard was connected not only with increasing the clarity of the image, but also with the expansion and increased power of the devices.
The task of significantly increasing the technical and operational capabilities of television was completed with full success.
Soviet readers were surprised to read in a magazine from an English news outlet in the USSR recently that England still used the pre-war standard on television and that it was considered "completely satisfactory"...

The cathode of the electron tube, in order to work normally, that is, to emit free electrons to the outside, must be heated to a certain strictly defined temperature. The cathodes of the tubes are heated by electric, direct or alternating current, the "direct filament" tubes are designed rather for direct current operation, while the "indirect filament" tubes may be heated freely, using direct or alternating current. The electric power of the filament current lost as heat in the cathode is calculated by multiplying the filament voltage in volts by the filament current in amperes. For example, if we have a 4 volt electron tube whose filament current is 1 ampere, then the filament power is: 4 x 1 = 4 watts. Filament is needed in order to keep the cathode temperature constant. As the hot cathode radiates heat to the outside and thus cools down, it is still necessary to supplement these deficiencies by supplying electricity from the filament source..
The power needed to heat the cathode in the electron tube depends on the surface of the cathode and the temperature at which it works. The least amount of glow power is required for electron tubes with an oxide cathode because, as we know, the operating temperature of the oxide cathodes is not high. The cathode area determines the amount of electron emission. High-emission electron tubes require large-area cathodes, which entails high filament power. Electron tubes with low emission have a small area and therefore the required filament power is small. Knowing the glow power of the electron tube, we can approximately determine its maximum emission. For one watt of power lost in the cathode, as we know, in the case of the oxide cathode, we can count about 100 mA of emission, so in the case of an electron tube with a filament power of 4 W, the maximum emission current will be in the order of 400 mA.
...
Tubes with the same filament voltage are connected in parallel to the power source, similar to e.g. electric bulbs for the lighting network.
...
Parallel connection of electron tubes is used in alternating current battery and mains devices - generally with low-voltage electron tubes.

On the other hand, in DC or universal apparatus, i.e. DC and AC, all filament filaments are connected in series. Since in this case the same current flows through all the tubes, all tubes used in such a system must be built for the same filament current.
...

However, in individual cases, instead of e.g. one 100 mA tube, two parallel connected 50 milliampere tubes may be connected to the power supply circuit. The power supply of tubes connected in series with each other must be at a nominal current. If the sum of the voltages of all serially connected tubes is lower than the voltage of the supplying source, then we have to connect the resistance in series with the tubes and adjust the current to the nominal value. Instead of a constant resistance of an appropriate value, an iron-hydrogen resistance called "Urdox" is usually used, which works automatically, i.e. it adjusts the filament current to the appropriate nominal value regardless of the voltage supply.

...
Now that we know the properties of the cathodes, let's get acquainted with the leads of the electron tubes and see what terminals the filament filament ends are connected to..

The first standardized socket for European tubes was the 4-pin socket, and then the 5-pin socket shown in the table (A and O). The table shows the bottom view of the sockets. As we can see, the legs of the vacuum tube are arranged asymmetrically so as not to make a mistake when inserting the tube into the appropriate socket... 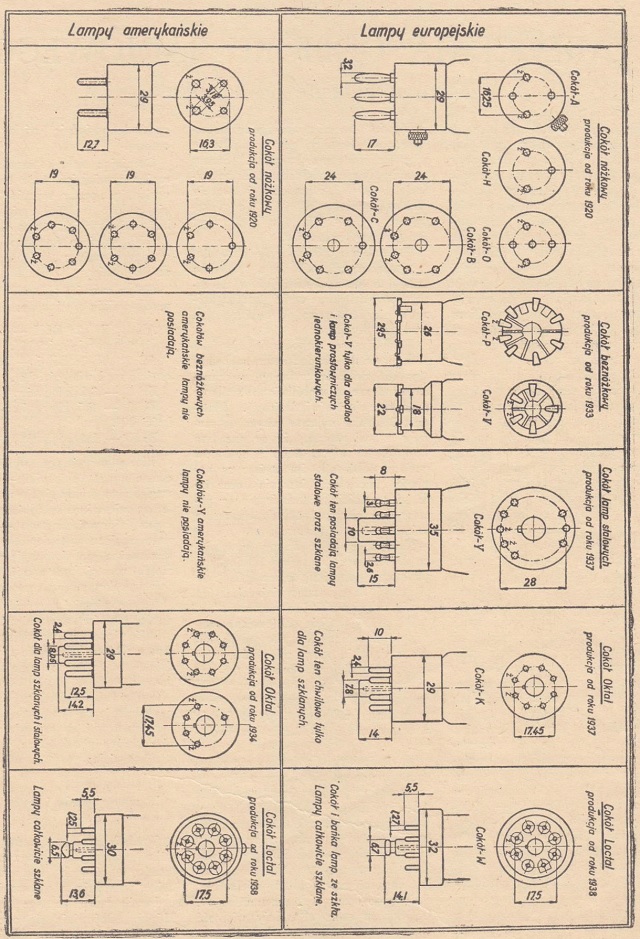 The properties of radio tubes known to radio amateurs from the basics of radio technology (see the article "Let's learn radio technology"), mainly the property of amplifying weak voltages by them, created very wide possibilities of their use, opening at the same time unlimited horizons for the development of the technique of weak currents.
The basic problems of radio technology in the early stages of its development related, as it is known, to the solution of the problem of good reception, mainly due to its power, which was gradually increased by the use of better and stronger (more amplifying) tubes both on the transmitting and receiving side radio tubes.
One might think that by going in this direction and using in a cascade manner not one, but a whole series of amplification stages, one can freely increase the reception strength of each station, which in the opinion of many radio amateurs would be the peak of their aspirations, although long ago it was recognized as a false view that the goodness of a radio apparatus was mainly due to its reception strength...

We already know the symbols of coils, variable and constant capacitors and the methods of their connections in the circuits of tuned radio receivers. We already know that thanks to the use of special wave switches it is possible to switch on the appropriate coils for the reception of each wave range, i.e. short, medium or long waves. So we can already draw or read a diagram and read the simplest radio equipment.
...
The figure shows a diagram of a detector apparatus which has an input circuit consisting of a slide coil. By changing the position of the slider on the coil, a greater or fewer number of turns are activated, as a result of which the circuit adjusts to resonance with the frequency of the received wave. 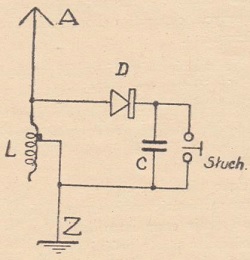 HALO, HALO - This is the Editorial Board of Natural and Technical Broadcasts of the Polish Radio (12)

Do you listen to nature and technical broadcasts regularly? By solving "Scientific Riddles" you can get valuable prizes in the form of interesting books...

At our Soviet colleagues (13)

The Soviet Union is a country where all inventions and improvements in the field of radio engineering and other fields of science and technology are aimed at serving the masses, for the good of all mankind.
With the increase of radio broadcasting, the amateur radio movement grows and spreads, for the development of which the Soviet state creates perfect conditions.

A Few Notes About the Photoelectric Cell (cover page 3)

Modern technology can pride itself on many achievements serving practical human needs. Some of them, such as sound film, television, light force measuring devices, automatic signaling devices, control devices for industrial needs, automatic switching of light and others are based in their essence on the use of a so-called photoelectric cell, or better - photosensitive. Due to its wide use for various purposes and needs of everyday life, it is worth getting acquainted with it. So what is it, how it works and what it is for? 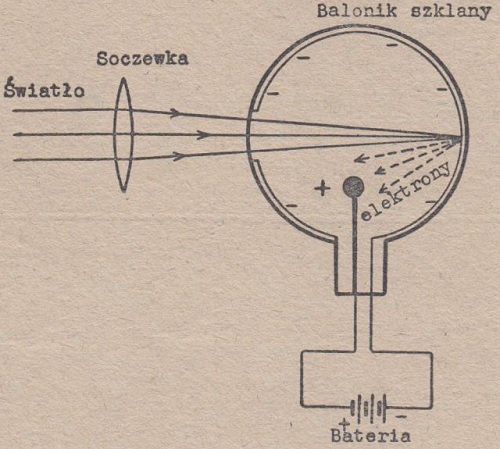 The oldest photosensitive cell was based on an interesting property of a chemical element called selenium. The name "selenium" comes from the Greek word "selene" which means moon...