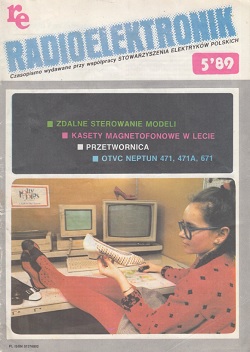 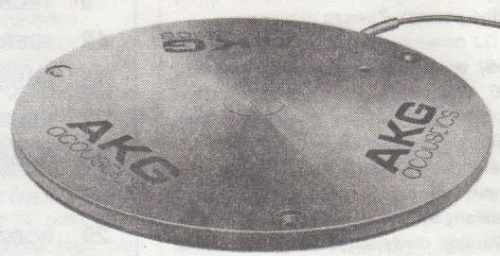 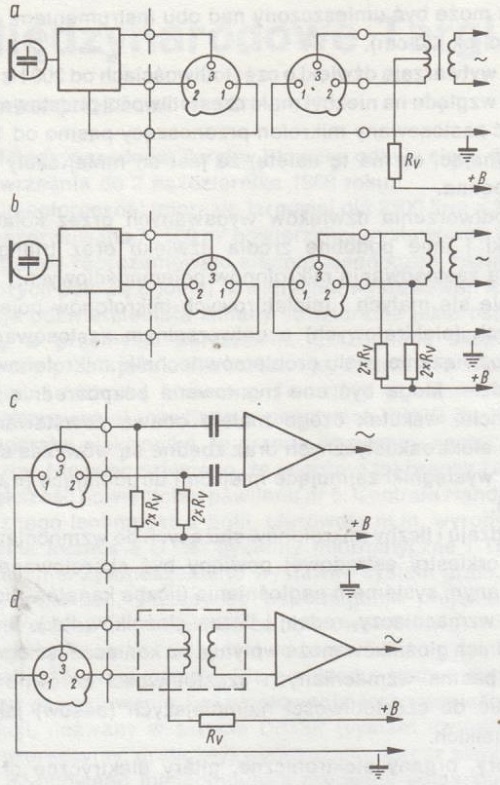 Diagrams of powering condenser microphones through a derivative wire path.

The characteristic features of the illuminophony device described in the article are: the use of Siemens UAA180 integrated circuits (national equivalent of UL1980N) in the device,

used to light the light-emitting diodes in the control indicators, the use of optoelectronic coupling between the control members and the output light member of the device, and the design of light sources as three light bars of varying height. The power of the device may vary, depending on the bulbs used and their power supply. 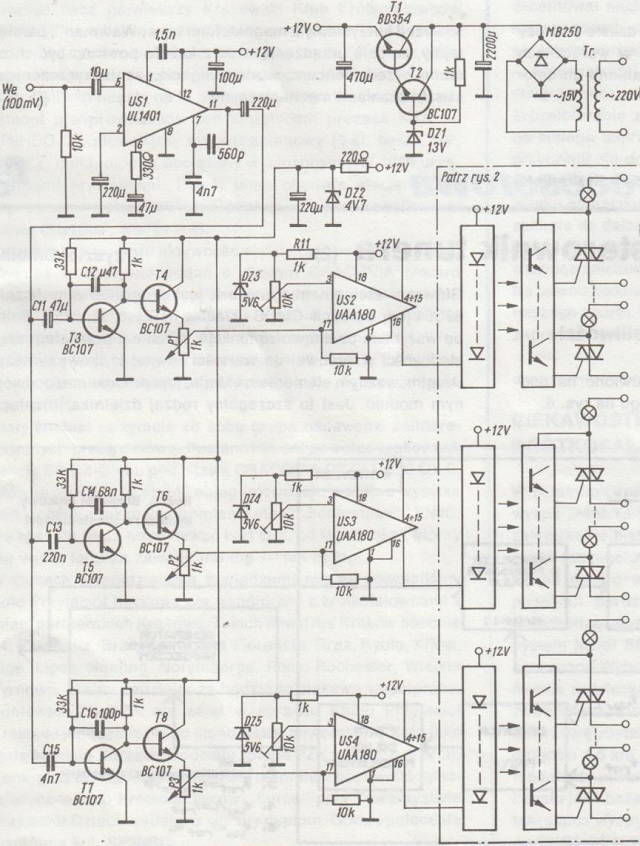 Schematic diagram of the illuminophonic device

The summer period is approaching, and with it trips on trips and holidays with various types of cassette recorders. Therefore, it is worth paying attention to a few rules that will protect us against damage to the cassettes or deterioration of their performance.

Neptun 471, 471A, 671 TV sets, produced since 1984 in Gdańskie Zakłady Elektroniczne Unitra - Unimor, are designed to receive black and white television programs broadcast in bands from I to V according to the DK standard.
OTV Neptun 471, 471A, 671 are stationary class II TV sets with safe cathode ray tubes, powered from the mains with alternating voltage 220 V + 5% / - 10%, 50 Hz, intended for operation in moderate climate conditions. 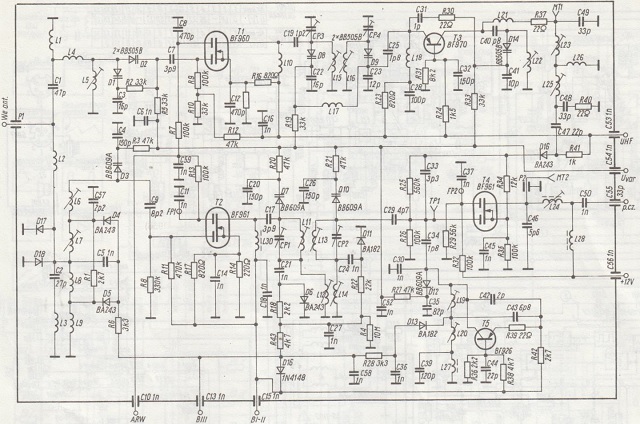 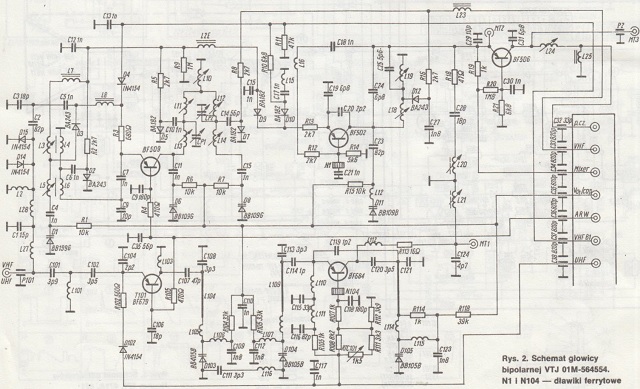 THE YOUNG ELECTRONICS CLUB - A GUIDE OF ELECTRONICS. TRANSISTORS (2) (22)

In connection with the main parameters, the classification of transistors into individual types was adopted. It is most convenient to use a catalog in which transistors are classified primarily by main parameters and, to some extent, by fields of application.
In the CEMI Scientific and Production catalog of the CEMI Semiconductor Center, in accordance with the internationally accepted system, the second letter of the marking determines the type of transistor according to the following code: 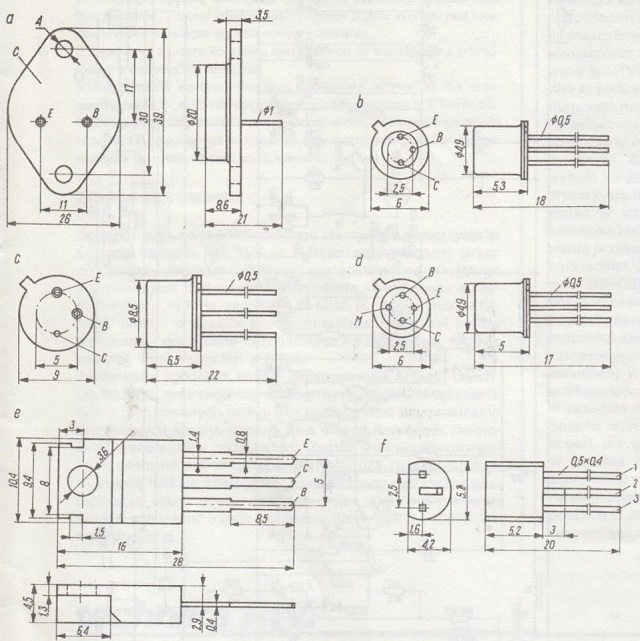 Sketches of the more common types of transistor housings

The article describes the parameters, construction and operating principle of a model remote control device called MFFS 27 MHz, manufactured by VEN PIKO Sonnenberg (East Germany). It is the successor to the Signal FM-7 device, previously produced and sold also in Poland (described in "Re" no. 1/1986). In the near future, the MFFS 27 MHz set is to be sold by the Central Scouting Store.

MFFS 27 MHz is designed for remote control of flying and floating models and motor vehicles. The average range of the device does not exceed 1 km on land, in water or when controlling a flying model. When controlling models on land, the range is the smallest as it depends on the type and shape of the terrain. 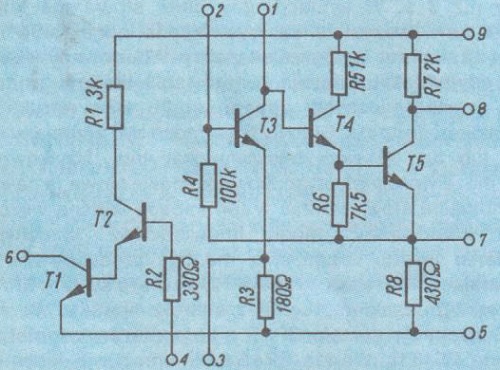 Electrical diagram of the LA3210 chip 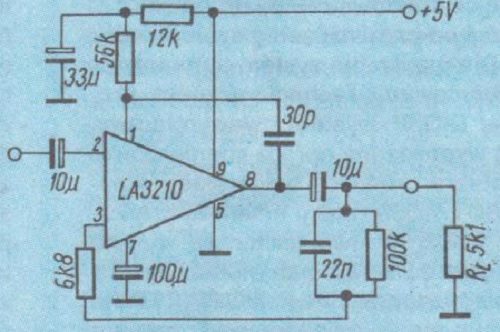 Electrical diagram of a correction amplifier for a tape recorder

In general, there is a problem with powering devices that require DC voltage from an AC network, but the reverse situation also occurs. Here is one way to do this.

Diagram of a low-power DC to AC converter

FROM THE COUNTRY AND FROM THE WORLD (33)