Stereo on a Shoestring 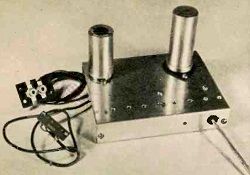 The most exciting news for the hi-fi music listener since the introduction of the LP record is the development of the stereo disc. Stereo records now available take you from the blaring brass band of the bullfight ring to the whirling three-quarter time of the Strauss walts... and the stereo bandwagon is just beginning to roll/ By the time you read this, the record bins will be chock full of music for every taste - the designed for "two-ear" listening.
The big question is - How much? What do the stereo records and a playback machine costs? The good news is that you don't need the wealth of Midas to set yourself up with three dimensinal hi-fi. The present list price of the stereophonic records averages only about a dollar higher than a standard LP.
How about the playback equipment? Go about it the right way, and you can match the stereo records in cost, with a complete setup for approximately fifteen dollars. 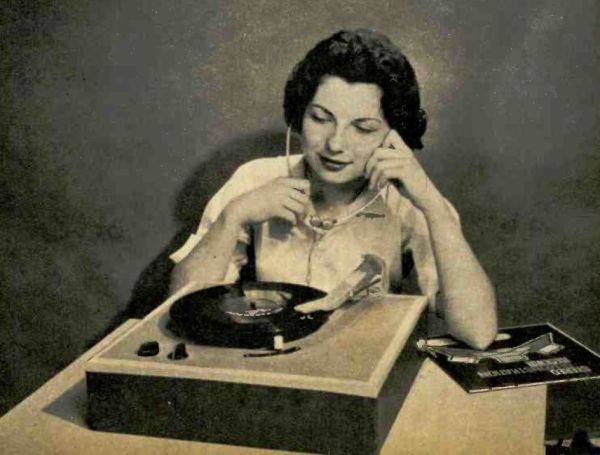 The two stereo channels are fed separately to each of the hearing aid type headphones. The two knobs seen at lower left are optional volume controls 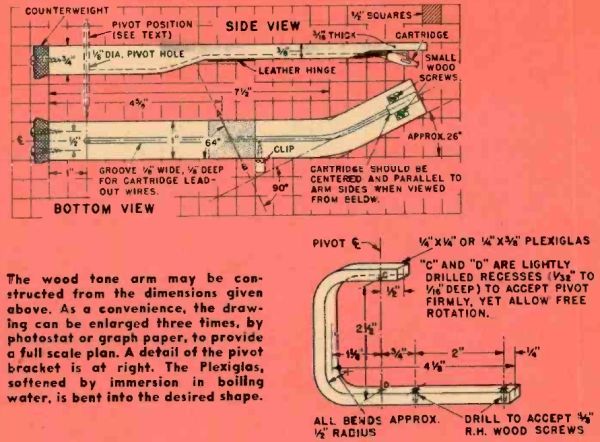 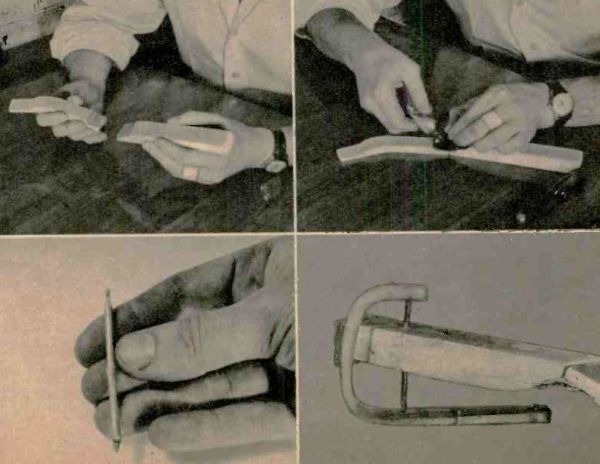 The two upper photos show the arm cut, recessed, and joined by the flexible hinge. This hinge is made from rubber-impregnated fablic or thin leather. At lower left are two ball point refills that serve as pivot. Lower right, mounting of pivot with tone arm and bracket. 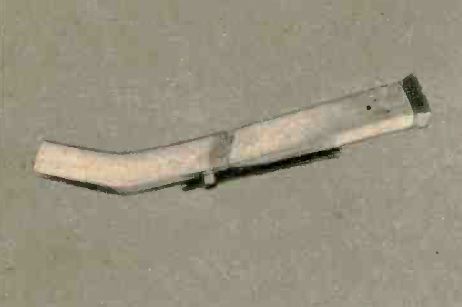 Top view of arm. Counterweight to the right is a chunk of lead filed to shape. The thin brass rod is for adjusting stylus pressure. 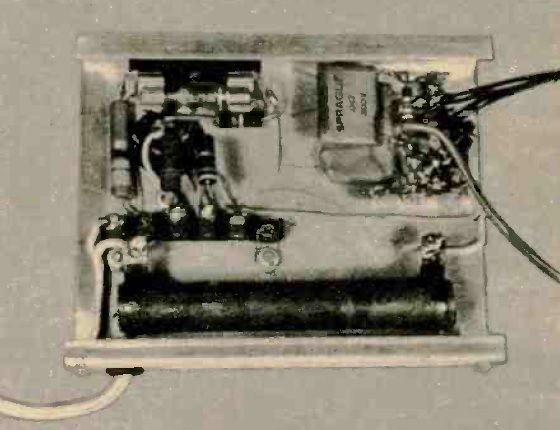 Underside of chassis. Next month, when modification for driving 2 speakers is described, R10 (bottom) is removed for new parts. 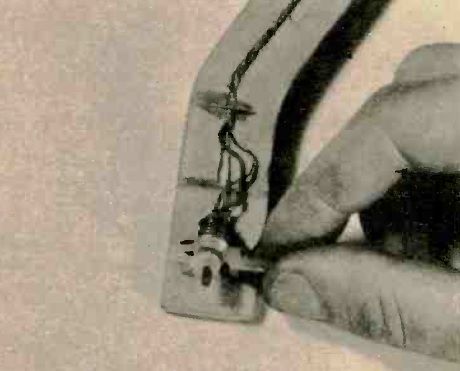 The Electro-Voice stereo cartridge, at left, is mounted in its holder. The 2-wire shielded cable carries the signals to the amplifier.

Here's how it's done. The heart of the EI player is the new Electro-Voice $3,50 stereo cartridge, Model 66 3-speed turnover Power-Point. The Power-Point stylus rides along the stereo record groove and produces two separate signals. They are forwarded through a two-channel amplifier to the two elements of the stereo headphones and then to your ears.
The pickup arm shown is a special home-made job. It need not be, of course. Any standard commercil arm could be used. Because of its low natural resonance, wood was chosen as arm material. The arm is jigsawed to shape from a lenght of ¾″ pine board as per the drawing. A rasp file, plane, and several grades of sandpaper are used to bring the arm to its final dimensions and provide a finished appearance. The arm is then cut in two at hinge line A-B.
Before installing the hinge, construct the pivot assembly. The vertical pivot (on which the arm swings horizontally) is made of two used-up metal ball-point pen refills. Before starting work on the refills it's a good idea to soak them in carbon tetrachloride or other solvent to remove any remaining ink.
One refill is cut to a length of 2½″ as measured from the end with the ball point. The ballbearing assembly of the other refill is removed with a pair of long-nose pliers and inserted in the open end of the first refill. You will end up with a little rod with a ballbearing tip on each end for perfect pivot points. 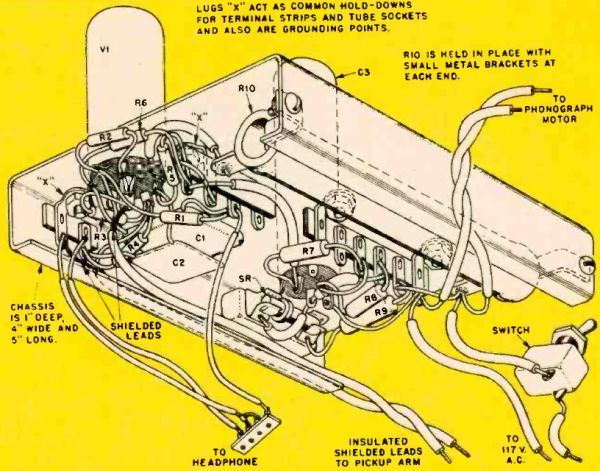 SR, in the wiring guide above, is a new type silicon rectifier that clips in like a fuse. 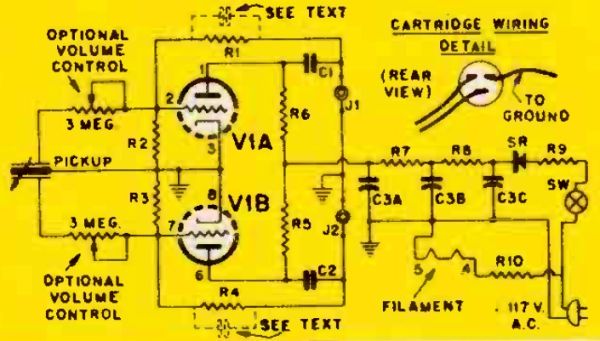 The circuit, above, is AC-DC type. Precautions in the text must be observed to avoid shock.

The next step is to drill a hole through the rear of the arm to receive the pivot. The pivot mounting is the only critical point in the arm construction. The pivot hole must be drilled exactly between the two sides and perpendicular to the arm's longintundial axis. The size drill used will depend upon the diameter of the barrel of the ballpoint refill. The pivot is press fit into place and, once the arm is set up permanently, a small collar of tape or a spot of Duco cement can be applied to hold it in place.
The hinge that joins the two arm sections is made of rubber-impregnated fabric such as used in rubber overshoes. A tire patch or thin leather strip would probably serve as well. A good grade of glue should be used to attach the hinge to the underside of the arm. If needed, staples can be used to reinforce the glue. After the sections of the arm are joined, the hinge should work smoothly with practically no horizontal play at the hinge point.
The pivot bracket in the author's model is constructed of a 1/4″×3/8″×7″piece of Plexiglas. It can be bent to the desired shape after immersion in boiling water for several minutes. A piece of aluminium stock could be used instead with equally good results. In either case, two small "dimples" are punched or ground at points C and D which serve as bearing hollows. It's important, when the arm is mounted, that C be exactly over D for proper arm balance. The bracket should be bent so the ball-point pivot assembly, when installed, rotates freely but is not loose. This adjustment is relatively easy to make. 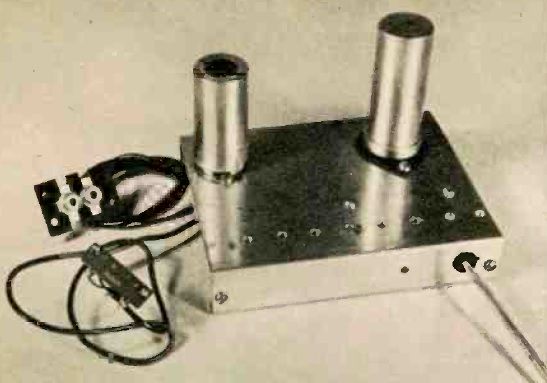 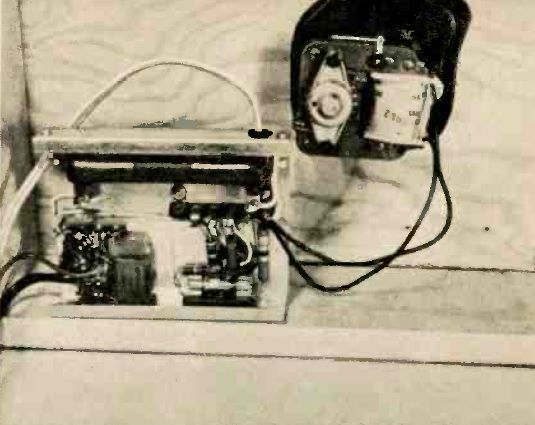 Amplifier chassis is located in wooden base. Motor, above, draws AC through 2 black leads.

A counterweight is installed on the rear of the arm. A chunk of lead scrap filed to shape and secured with wood screws was used on the author's model. The counterweight should be heavy enough to balance out the hinged portion of the arm and cartridge.
A sliding ¼″ brass or iron rod serves as the stylus pressure adjustment and is sensitive enough to adjust in 0,25 gram steps. The rod fits into a clip broken from a 3AG type fuse holder screwed to the side of the tone arm.
The Power-Point cartridge holder (E-V PT3) can be mounted with small nuts and bolts or ¼″ wood screws. In either case, make sure it's firmly seated at the correct tracking angle. The two-wire shielded cable connected to the turnover assembly should be the thinnest and moct flexible available. It is carefully run so as not to impede the motion of the arm. It can be held in place with glue or thin wire staples. The pickup arm rest is a 2″ wood screw or dowel set in the base at the appropriate point.
You are offered three modes of operation of the stereo player. The least expensive and simplest technique is to drive the headphones directly from the cartridge. The disadvantages of this system are that the E-V cartridge doesn't see its proper load resistance  (the requency response of the system suffers as a result) and the playback may not be loud enough for your particular taste.
Both these problems are solved by the second approah. A one-tube, two channel amplifier is used to feed the headphones. A dual triode tube is used with each triode identically wired, but operating independently.
The circuit of the amplifier include optional volume controls since headphone listening doesn't really require them. If necessary, the gain of each triode can be set to the preferred level by chaanging the values of feedback resistors R1 and R4. The higher the value of the resistors, the less the feedback and hence, the higher the gain. Values of 1 to 4,7 megaohms are about right. If the headphone response seems a little shrill and peaky, it can be flattened by adding 33 mmfd. capacitors across R1 and R4. The component values given in the schematic were arrived at after considerable experimentation and were judged to provide the best response for all types of recorded material.
The switch connected across the headphone terminals parallels the outputs for monaural records. If an LP only Power-Point cartridge (E-V 61) and 331/3 RPM, single-speed motor is used, the switch is omitted.
The silicon diode used as a rectifier can provide far more current than the single amplifier tube requires. The silicon type was chosen because of its very small physical size and greater power demands that are going to be made on the rectifier when the two output tubes are added for loudspeaker operation. If you don't intend to add speakers to your setup, one of the small 25mA selenium rectifiers will be adequate. Other components in the parts list remain the same.
The turntable base can be constructed of scrap wood or commercial one used. In either case, make sure there is enough room beneath the base to mount the amplifier. The turntable is less than $6,00, either single speed LP or a 4-speed model.
Note that the amplifier has a AC-DC type circuit with the chassis connected to one side of the AC line. Since the only exposed and possibly "hot" conductor is the phono shielding wire, it can be insulated with tape. (If control knobs are used, make sure their set screws are not exposed.) Recheck your wiring, and you're ready to go.
Set the stereo-phones into your ears and a Jamaican steel band is all about you hammering melodies from their oildrum tops. A moment later, the Scots Guards with bagpipes march by you in review. The click of Flamenco castenets rouses "oles" as the dancers weave back and forth before your ears, to be replaced by the Dukes of Dixieland strutting down South Rampart Street.
This is the wonderful world of stereo. And next month we'll tell you how to get the rest of the family into that world, by modifying the amplifier so it will operate two loudspeakers.

The material was provided by Grzegorz Makarewicz, 'gsmok'