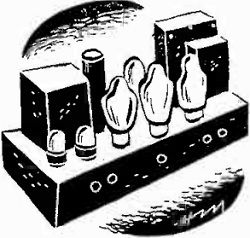 The Williamson amplifier circuit was first publicized in England in 1947, and in this country in 1949. It has achieved wide acceptance and popularity, and has been the basis for several modifications of the original design. The most basic change was the ultra-linear version of operation, which I developed and subsequently described*. This arrangement corrected 2 of the basic defficiencies in the original design - it increases the power capability of the amplifier to 25 or 30 watts, and it improved the margin of feedback stability.
Now, as always happens, progress in amplifier design has continued: it is possible to make further improvements in the Williamson design (both triode and ultralinear versions). These improvements again correct for limitations with respect to power output and stability.

Present thinking on requirements for audio power is vastly different from that of a few years ago. Then, most people said, "Ten watts is enough for me". Now, however, modern program material has been increased the power requirements substantially for realistic, undistorted reproduction. In addition, source material frequency responce has been extended, and this also introduces the need for re-evaluation of amplifier power requirements. Increased frequency response means that the amplifier has to handle power at greater extremes of frequency. At these extremes, the impedance characteristics of the loudspeaker change from the nominal values. This means that the amplifier is mismatched at frequency extremes, and a mismatch decreases the maximum-power capabilities of any amplifier.