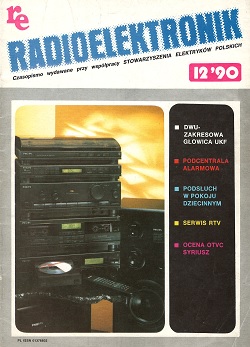 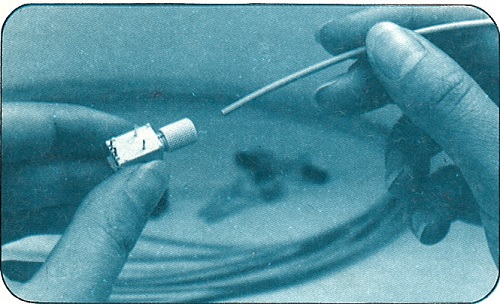 The company REVOX, known for its high quality products, offers a stereo loudspeaker system operating in accordance with a new concept. As it is easy to reproduce and gives interesting sound effects, it is worth getting to know it better.
The classic way of stereo reproduction requires the use of two loudspeakers separated by a distance, the so-called base. The optimal stereo listening position is in front of the loudspeakers, symmetrically to them. It has long been noticed that when using loudspeakers with a wide angle of sound or omnidirectional radiating units, the position of the listener in relation to the loudspeakers is less critical, but the stereo image of the sound becomes less accurate, especially in terms of the location of the apparent sound sources. 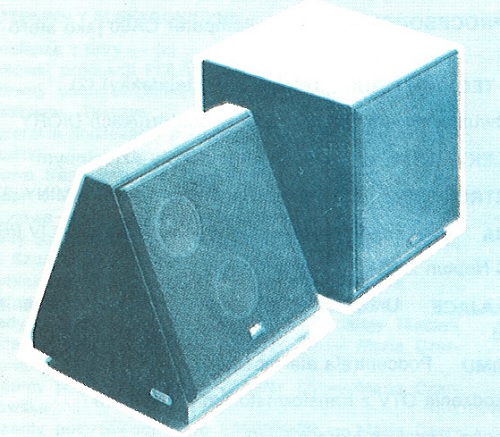 The Swiss acoustician - Walter Schupbach - proposed a solution consisting in placing the speakers of both channels in one housing in such a way that they radiate in opposite directions, i.e. to the left and to the right of the listener. It turned out that the best results are achieved by a housing with a triangular cross-section (see the drawing), divided by a wall into two parts. This solution can be compared to the radiation of sounds by one source, in principle omnidirectional, but the sounds radiated to the left and right and their reflections differ due to the fact that they correspond to different stereo channels. 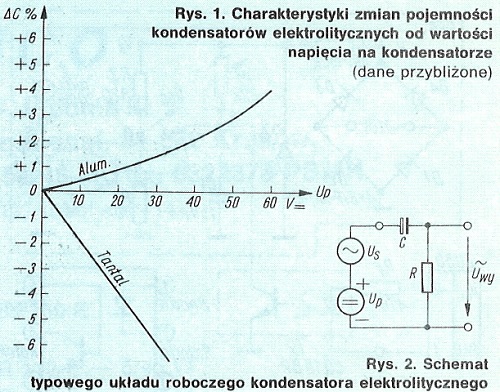 MICROPROCESSOR TECHNOLOGY - THE CA80 MICROCOMPUTER AS A LIGHT CONTROLLER (3)

The CA80 microcomputer can act as a controller for light advertising, disco lights, light hose, etc. The physical control of eight light channels is provided by the MIK52 board. The circuit diagram is shown in the figure. 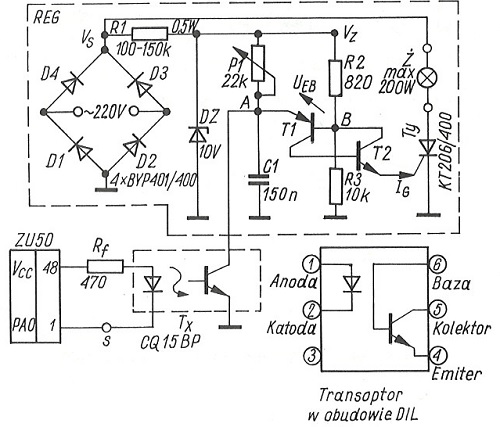 Diagram of a thyristor light regulator.

Documents are analyzed line by line. This is achieved by moving the document one line under the scanning bar using a roller driven by a stepper motor.

The article describes the construction of a two-band (OIRT / CCIR) VHF head used in such DIORA receivers as: Tosca AWS 306, analogue tuner AS 255, tuner with AS 954 frequency synthesis (adjusted in size and design to the MIDI set) and AS 844 tuner (adapted for the SEMI SLIM set). The next receivers of this company will also be equipped with dual-band VHF heads. 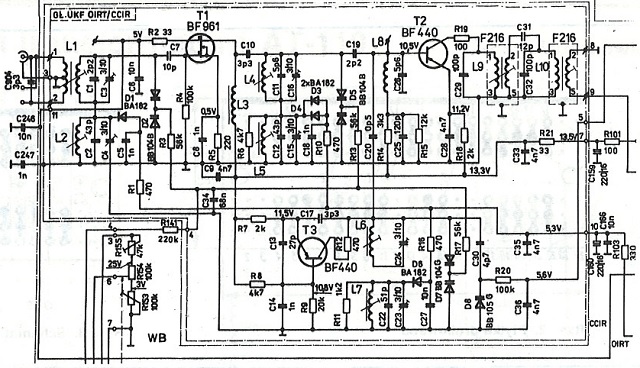 CLUB OF YOUNG ELECTRONICS - EARNING IN THE CHILDREN'S ROOM (9)

The circuit was made and practically tested in the "Re" editorial lab. The device presented in the article is used in a nursery, where it is used to control the behavior of a child left unattended. The scope of application of the system can be extended, e.g. to shop rooms, workshops, etc., e.g. to control the presence of customers in these rooms by personnel temporarily present at the back of the facility. 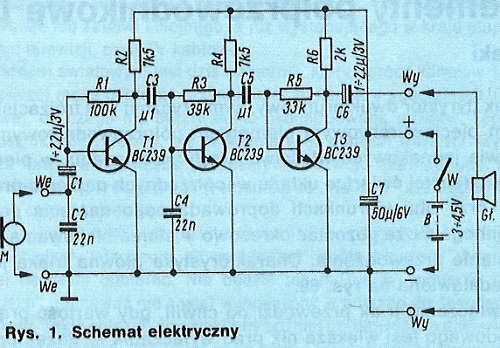 The eavesdropping system is constructed with three transistors (T1, T2, T3). The individual stages of the circuit are low frequency amplifiers. with capacitive coupling, cascaded together. 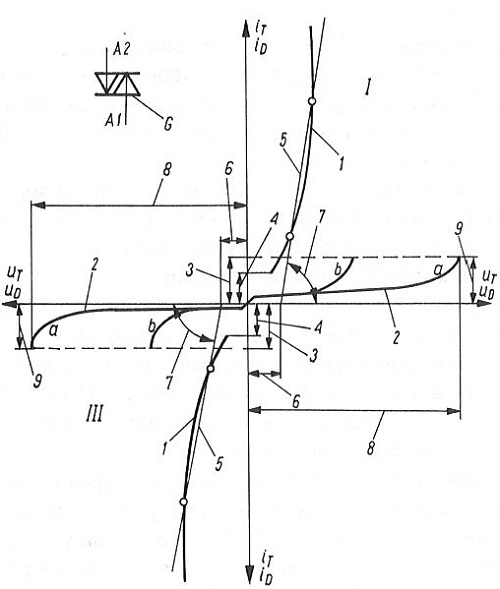 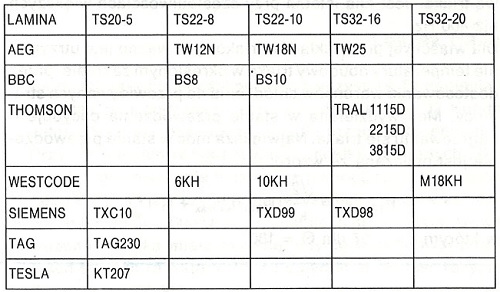 The device was made and practically tested in the "Re" laboratory. Despite their high price, nickel-cadmium batteries are becoming increasingly popular as a power source for portable electronic devices. Thanks to the possibility of recharging, they are reusable. They also have the added advantage of not leaking. However, they require careful treatment, which mainly concerns proper charging conditions and preventing the batteries from fully discharging. The article below presents the device for automatic battery charging, type KRH 15/51. Compared to devices available on the market, it has the advantage of maintaining optimal charging conditions. 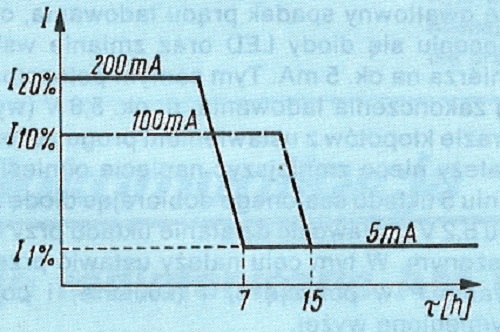 Graph of Ni-Cd battery charging current waveform as a function of charging time. 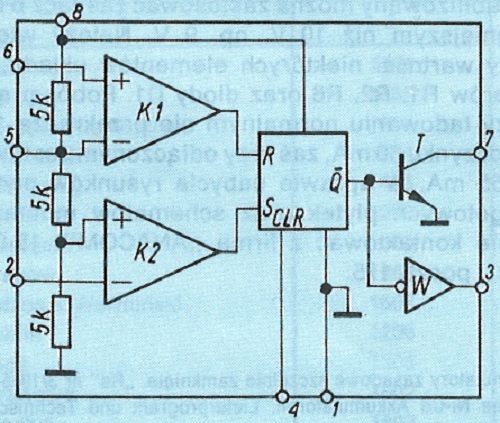 The figure shows a diagram of a device for charging nickel-cadmium batteries, and more precisely their set - four KRH 15/51 batteries connected in series.

Diagram of a device for charging Ni-Cd batteries.

The alarm sub-control panel was made and practically tested in the "Re" laboratory.
The alarm sub-control panel is an intermediary device between the alarm sensor and the appropriate alarm control panel. It is used when the control panel has an insufficient number of zone zones or when these zones are of a different type than the required one. The alarm sub-panel described in the article allows, in principle, any increase in the number of lines. The line inputs in the sub-unit are of the parametric type. This allows the use of any type of sensors, ie NO or NC. The line balance is optically signaled. The above-mentioned features of the sub-control panel are particularly useful when starting the alarm system in place, as well as during subsequent service works. They also enable the user to check the system status on a daily basis.

The article in the 3/1988 "Re" article - "Typical damage to CYGNUS T401 and URAN T601 TV sets" contains a lot of valuable comments and information on how to diagnose and repair these sets. However, there were two serious errors that - I think - should be corrected in the interests of repairing receivers of this type.

IMPROVING THE RELIABILITY OF THE AT-110 TRANSFORMER (23)

The AT-110 transformer is used in various types of domestic black and white OTV. Here's a way to reduce its failure rate.
The cause of almost all failures in the AT-110 transformer is a breakdown and a short circuit in the high voltage coil. A short circuit occurs between the beginning of the high voltage winding and the winding wound at the bottom of the coil. 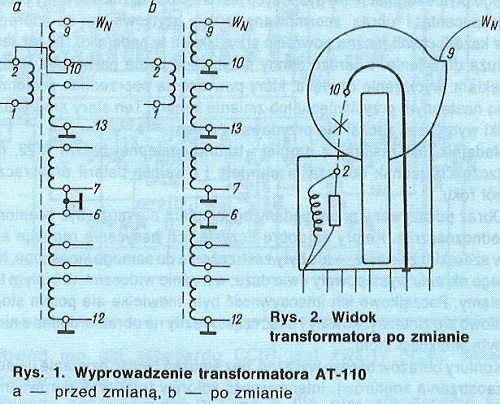 The tested receiver was selected randomly from the batch that had previously undergone technoclimatic tests. The total test time under normal domestic use was 1700 hours and during this time the receiver did not suffer any damage that would prevent the reception...
...First visual impression: the receiver is not from this era. The box resembles the period of "average Gierek"... 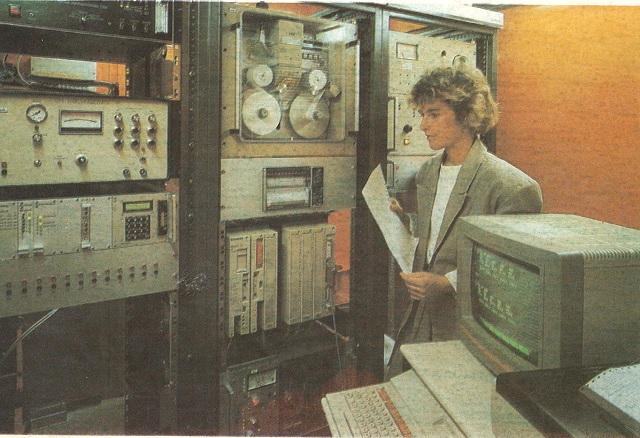