Editorial office: The following description concerns a system, the model of which was built at our request and practically tested by the designer.

The amplifier described here is perfect as a final power amplifier for playing music from records or tapes in the apartment. It is also suitable for broadcasting dance music in medium-sized halls and clubs.

Construction is easy; it can be performed by any radioamateur with basic theoretical and practical knowledge.

Due to the need to obtain a power equal to at least 10VA with very low nonlinear distortions, I decided to use the output stage amplifier in a push-pull configuration with negative feedback. This is called "ultralinear" system. The feedback voltage in this system is obtained from taps, or from separate windings on the output transformer. By changing the ratio of the alternating voltage of the screen grid to the anode alternating voltage, we change the working conditions of the end tubes. With this ratio equal to one, the tubes work as triodes, because the shielding grids are connected with the anodes, while with the ratio equal to zero, they act as pentodes (Fig. 1). 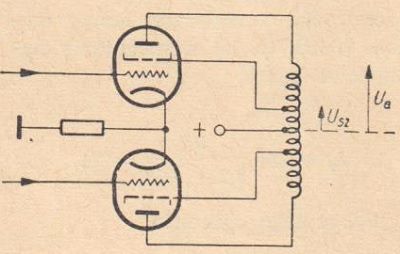 For the ratios with intermediate values, the circuit has a number of advantages over push-pull circuits, both with triodes and pentodes, and above all, less nonlinear distortions at large and small signals, at the cost of low power loss. Moreover, such feedback significantly reduces the internal resistance of the system.

Both halves of the anode windings of the transformer should be placed symmetrically by dividing the window into two sections, each for one half of the anode winding. The unbalance has a significant impact on the phase shifts and amplitude differences between the anode current and the screen voltage, so that even harmonics of higher frequencies may not reduce each other. 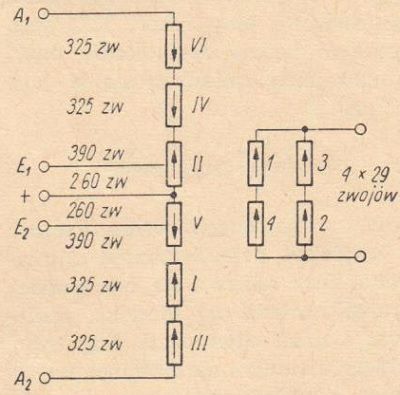 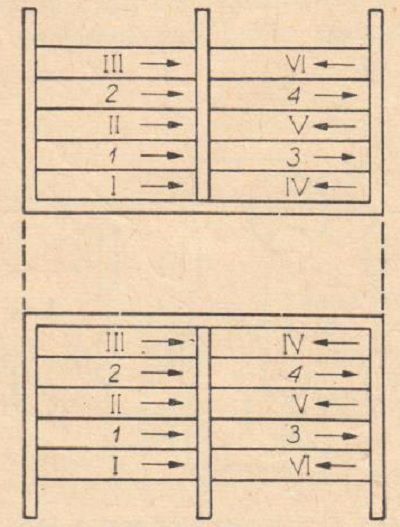 Fig. 3. Arrangement of windings on the body of the output transformer (arrows indicate the directions of winding)

To make the transformer, I used a core with the dimensions given in Fig. 4. 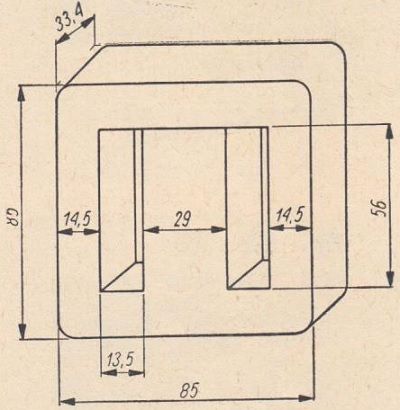 Fig. 4. Dimensions of the core of the output transformer.
Core cross-section (effective) 7.9 cm2, core composed of plates without a gap.

Of course, another core may also be used if its cross-section is large enough and the windings fit within its window..

In modern amplifiers with push-pull output, phase inversion takes place without the help of a transformer or choke, because the phase inverter stage is sometimes subject to negative feedback, and circuits containing inductances prevent the use of a sufficiently strong feedback.

There are a number of phase inverting tube circuits, from which I chose the one shown in Fig. 5. 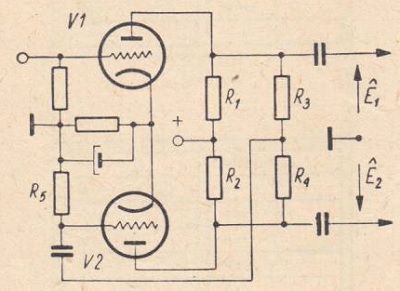 Fig. 5. Diagram of the phase inverter.

The quality of the phase inverter circuit can be judged from its symmetry, which can be expressed by the voltage ratio E1 / E2. For the system shown in Fig. 5, this ratio expresses a relationship:

As it can be seen, the symmetry of the circuit is the better, the greater the gain of the V2 tube.

Schematic diagram of the amplifier.

The amplifier circuit is shown in Fig. 6. 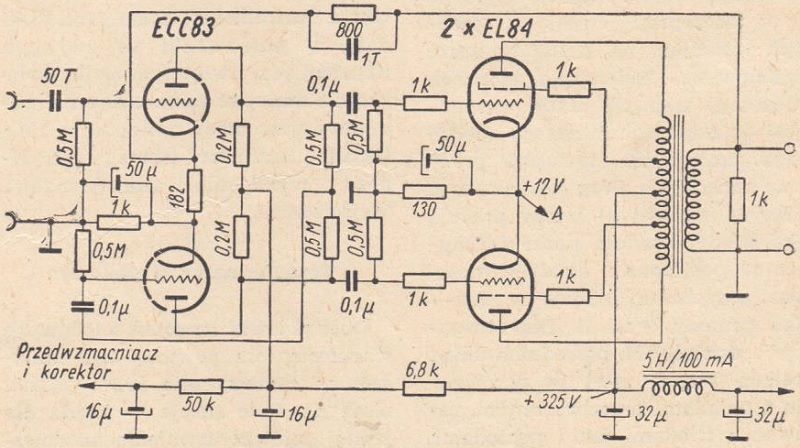 Fig. 6. Diagram of the amplifier.

The number of elements used in the system is as small as possible in order to reduce the cost of building the amplifier as much as possible, without reducing its quality. The amplifier is designed to work with loudspeakers with a resistance of 3.5 ÷ 4Ω, which does not mean that with a loudspeaker load, e.g. 7Ω, it will work poorly. In this case, it may simply not give full power.

As can be seen from Fig. 6, in addition to the local feedback in the output stage of the system, a feedback covering the entire amplifier was used. The voltage divider consists of resistors: 800 Ω and 180 Ω. The 180 Ω resistor is blocked by a 1000 pF capacitor to correct the already existing phase shift at the highest frequencies in the band. The feedback is over 20dB, the sensitivity of the amplifier for 10VA at the output is about 1.2V (at 5Ω load).

Due to the low sensitivity, you need a preamplifier that would allow you to drive the power amplifier from an adapter or tape recorder.

The schematic diagram of the pre-amplifier is shown in fig. 7.

Fig. 7. Diagram of a pre-amplifier and frequency response corrector.

This amplifier consists of two gain stages, between which there is a resistive-capacitive characteristic equalizer in a known and widely used configuration.

In the upper position of the "W" potentiometer slider we have raised treble, because 50kΩ and 100kΩ resistances only for high frequencies are shunted by a 200pF capacitor. In the lower position of the slider of this potentiometer, the treble is cut off, a resistive-capacitive voltage divider is formed consisting of a resistance of 100kΩ and a 23000pF capacitor, which cuts off the high frequencies of the band.

The operation of the bass tone control is similar. In the upper position of the "N" potentiometer slider, a resistance of 50kΩ, a capacitance of 20000pF in series with a resistance of 10kΩ form a divider that allows only low tones to pass through, and strongly weakens the high tones. In the lower position of the "N" potentiometer slider, a divider is created: 50kΩ, 3000pF and 10kΩ, on which low frequencies are weakened, so we have low tones clipping. For 1000Hz the system has more or less constant damping, regardless of the position of individual regulators. The gain of the first stage of the amplifier for 1000 Hz is approximately 2.

The gain of the second stage of the preamplifier, due to the negative current feedback (the cathode resistor not blocked by the capacitor) is only about 30.

The sensitivity of the entire device (for 10VA and 5Ω at the output) is about 20mV.

Since the preamplifier is quite sensitive, all equalizer elements must be carefully shielded.

The diagram of the power supply is shown in Fig. 8. 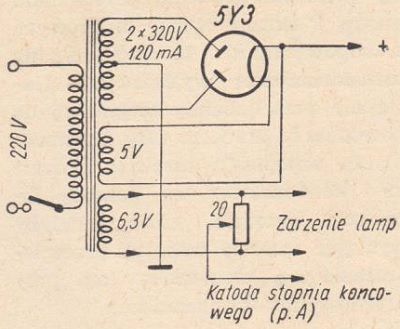 As you can see, it is a completely conventional power supply. The filter consists (Fig. 6) of a 5 ÷ 10H choke and two electrolytic capacitors, 32μF each. In order to remove the mains hum from the cathode side, the filament winding of the tubes is symmetrized with a 50 Ω potentiometer, the center of which has a voltage of about + 12V (cathodes of the output tubes). This is to reduce fiber-cathode emissions.

All the above-described elements of the amplifier are assembled on a common chassis with dimensions of 200x300x60mm. The arrangement of the elements on the chassis is shown in Fig. 9. 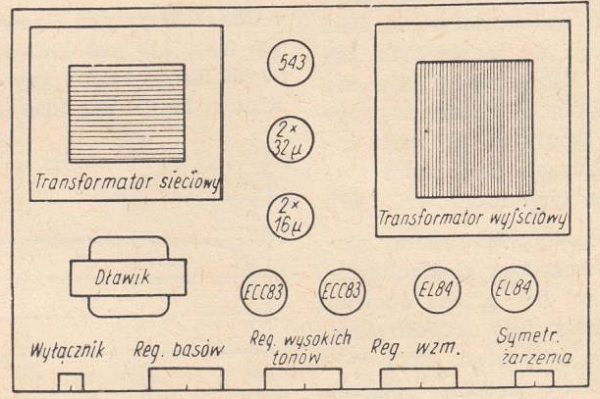 Fig. 9. Arrangement of elements on the chassis.

The assembly begins with the mechanical fastening of the elements to the chassis. Make sure that the mains transformer is not too close to the output transformer and that the potentiometers are placed away from the power supply wires (especially the filament of the electron tubes). Then we proceed to perform the so-called thick copper wire ground bus. The sketch shown in Fig. 10 will help us to see how to make the ground bus. 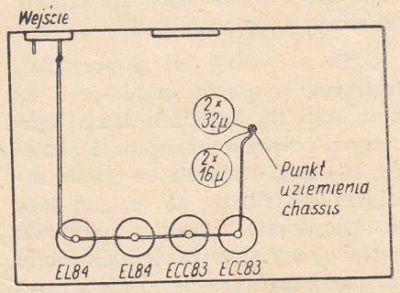 Fig. 10. Manufacturing of the earthing bar.

We start this work from the input socket. It should be remembered that the level of mains hum in the amplifier depends on the connection with the grounding bar. The rail can only connect to the chassis at one point, preferably somewhere near the power supply. The electrolytic capacitors of the filter and decoupling circuits should be mounted on washers isolating the housing (minuses) from the chassis. The casings of these capacitors are earthed by connecting them to the rail.

After this work is done, we connect the heating circuits of the amplifying tubes, the rectifier tube, and then the power supply of the anode circuits. Now we can start the proper electrical installation. We start at the end, that is, with the power amplifier. We connect the anodes and screens of the end tubes with the appropriate connectors on the output transformer with the shortest possible cables. Then we gradually move to the phase inverter and preamplifier circuits, fixing resistors and capacitors with connectors wherever short circuits could occur due to the displacement of elements (e.g. when carrying the amplifier).

The earthing of individual resistors (cathode, leakage) is made by soldering the terminals directly to the earthing bar, if possible in one point for circuits of one stage.

The grounding of the screen of the cable connecting the input terminals of the amplifier with the potentiometer regulating the sound strength should be made at the input itself.

After the (careful) assembly, you should also carefully check the system, then insert the rectifying tube into the socket and after connecting the amplifier to the mains, check that there is no high voltage on the amplifier ltubes' glow plugs. It should be remembered here that ECC83 tubes have filament connected to different contacts than other types of "80" series tubes.

After this initial test, the electrolytic capacitors should be discharged by shorting them through a 100kΩ resistor to ground (not with a screwdriver, as a large current will flow that may damage the internal connections of the electrolytic capacitor), then insert all tubes, turn on the loudspeaker and try if the amplifier does not turn on incorrect reverse connection. Be careful not to damage the loudspeaker, because the excited amplifier produces a power of about 20W.

If everything is OK, we measure the anode and cathode voltages. The voltage of 11 ÷ 12V should be present at the cathodes of the output tubes. The positive voltage of the power supply (after the filter, on its other capacitor) should be about 325V. When driving the amplifier, the voltage should not drop by more than 5 ÷ 10V.

At this point, we could end the static tests of the amplifier.

In the event of excitation of the amplifier (generation), disconnect the feedback and check whether the excitation has subsided. If so, change the direction of the feedback connection by changing the terminals of the secondary winding.

At home, further tests are limited to checking the amplifier's behavior using the "by ear" method. So we check if the amplifier does not distort, if the regulation of the characteristics is working properly and if the hum of the mains is not too big..

With careful assembly according to the general rules of assembly and with the correct voltages on the electrodes of the tubes, the amplifier should work immediately without any problems.

The described amplifier has been studied in detail. The obtained results are presented below. 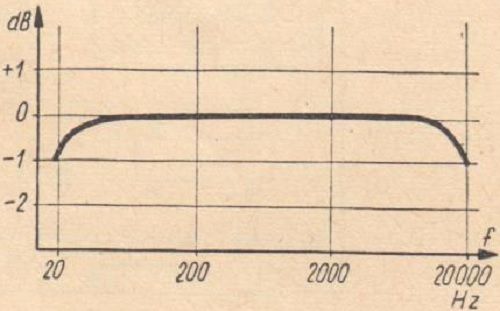 Fig. 11. Frequency characteristics of the amplifier. 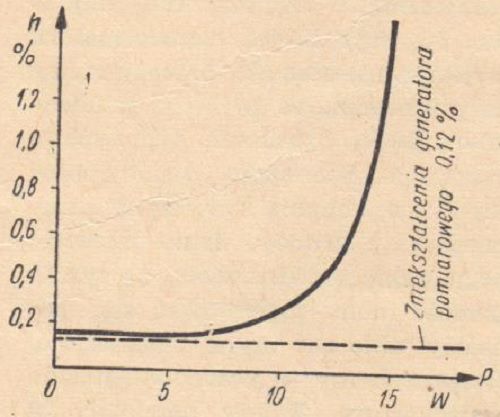 Fig. 12. Characteristics of the nonlinear distortions of the amplifier.

The sensitivity of the amplifier with an output power of 10VA - 1.2V.

A PPAE generator with an average harmonic content of about 0.12% was used to test the amplifier.

The frequency response can be adjusted within the following limits: 30Hz ± 16dB, 20kHz ± 18dB.

The preamplifier nonlinear distortions do not significantly increase the total harmonic distortion of the amplifier.