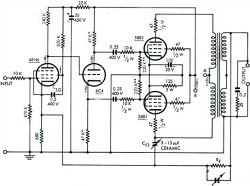 Universal Feedback Amplifier Circuit
ARNOLD J. KAUDER (Principal Engineer, Bendix Aviation Corporation, North Hollywood, California)
AUDIO, January, 1960, VOL. 44, No. 1
A simple amplifier of exceptional performance which should be adequate for practically any installation is the basis for this article, but its greatest value lies in the "universal" instructions for adjusting any feedback amplifier.
(Note: The original notation of units used at the time of writing the article has been preserved.)

The amplifier to be described has performed well with five different output transformers, which has led the writer to use the designation "universal." The amplifier has in each case been found completely stable with (a) no load, (b) 8-ohm resistive load, (c) 8-ohm loudspeaker load, and (d) a 0.1 μF capacitor load added to any of the load conditions of (a), (b), or (c) above. The feedback factor employed has been 20 db ± 1 db.

Few of the "Williamson Type" and other amplifiers seen by the author have been capable of meeting such a stability test. Breathing of the loudspeaker cone, due to very-low-frequency oscillations, and supersonic oscillations readily seen on an oscilloscope are all too common. Either type of oscillation can produce negative charges on the grid sides of the output-tube coupling capacitors, with distortion and limited power output resulting. Marginally stable amplifiers have also been observed which do not normally oscillate, but are highly regenerative at extreme frequencies and do oscillate when audio signals with steep leading edges on the waveforms are fed to the input terminals.

A brief history of the development of the circuit is believed to be of interest and is as follows:

The author was a "high fidelity" fan many years ago and is still not ashamed of the performance of a class-A push-pull 2A3 triode amplifier (power output of 7 watts) still on hand. After a lapse of 10 years, a reviewed interest in high fidelity led to a study of feedback and the present day amplifiers which have achieved recognition in the literature. The writer found to his annoyonce that it was not possible to duplicate a published amplifier circuit and employ a different output transformer and a more compact layout - unless extensive redesign of the coupling and feedback circuits was carried out.

The author then made an analysis of the problems in the design of feedback amplifiers and established the following principles for his own amplifier.

The schematic of the resulting amplifier is shown in Fig. 1, and its power supply in Fig. 2. It consists of a pentode voltage amplifier directly coupled to a split-load triode phase splitter, which is resistance coupled to the push-pull output pentodes. Actually, the amplifier may be thought of as the simplest two-stage pentode resistance-coupled type, with the phase splitter added to convert the design to push-pull operation. This simple straightforward design is neither startlingly new or even original, but fulfills admirably the requirement of the least possible number of stages and coupling networks. This is the initial key to stability in a feedback amplifier. The final key to the high level of stability lies in the three feedback paths, which will be discussed in a later paragraph. 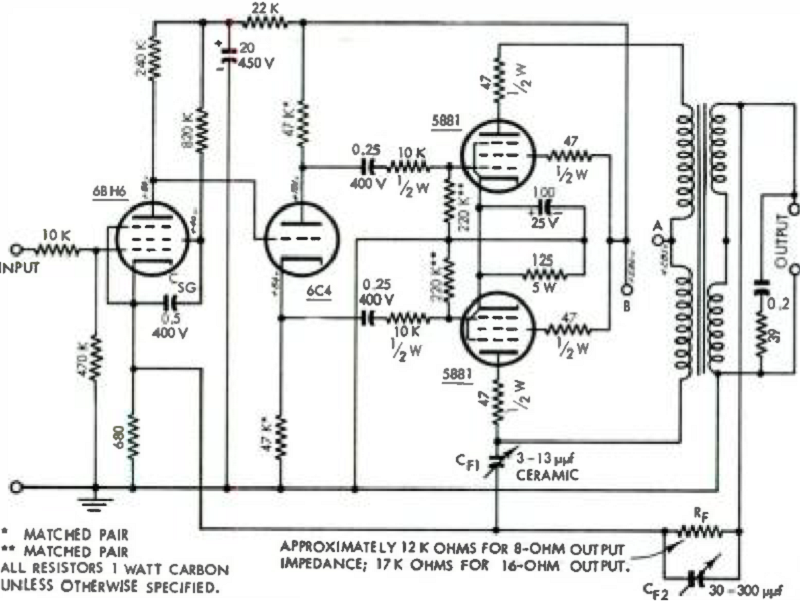 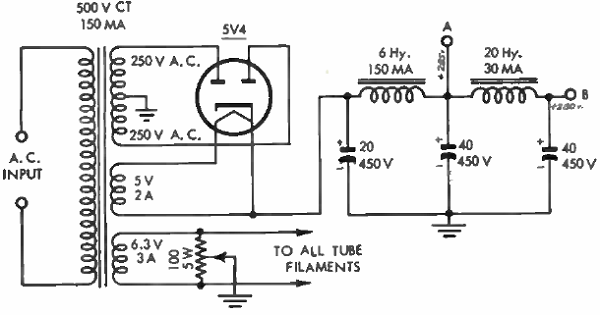 To satisfy the Class A and power design requirements, the output tubes had to be beam power tubes of the 6L6 type, with improved construction as exemplified in the type 5881 and 6L6GB. No available triodes are capable of providing either the high gain, or the power output in Class A operation which beam power tubes provide - and provide with modest power supply and driver stage requirements. Stabilizing resistors of suitable values are employed in the grid, screen grid, and plate circuits. The tubes are self-biased, since fixed bias does not appear to offer any advantage with beam-power tubes, while self bias permits the use of higher impedance in the grid circuits, with less loading of the driver stage.

The push-pull output stage is driven by a split-load or eathodyne phase splitter employing a type 6C4 miniature triode. After considerable study of phase splitters, this type is considered by the writer to be superior to all others, including the cathode-coupled inverter - actually the only other type deemed worthy of consideration. There has been much talk about unbalance of the cathodyne phase inverter at high frequencies, but after reference to the available literature, the author considers this to be much talk not based on adequate investigation.

Actually, the equivalent source impedance of either output channel is1:

The output capacitances Co for each channel are, respectively1:

If these output capacitances are added to values of 10 μμf for wiring and 10 μμf for the input capacitance of the power output tubes, the total shunting capacitance of the two channels are 25.96 μμf and 25.28 μμf respectively, a difference of 0.68 μμf or approximately 1.5 per cent. Referring back to Eq. (1), the value of 460 ohms equivalent source impedance Ro with a shunting capacitance of 30 μμf will result in an output within 3 db of mid-frequency output beyond 10 mc, well outside the range of any audio amplifier this citizen ever wishes to possess. Any unbalance within the range up to a few hundred kilocycles is considered negligible.

As employed, the cathodyne splitter contributes little phase shift, is virtually free of distortion itself, is easily balanced with two matched load resistors and readily meets the driving requirements of 30 volts peak-to-peak output for the two power output tubes. The phase splitter is direct coupled to the input amplifier tube, a high transconrluctanee type 6BH6 miniature pentode. The design of the first stage is conventional. However, the screen grid potential is chosen to permit operation with a relatively low value of bias resistor in the tube cathode circuit, to reduce the impedance of the main feedback network.

While it is believed that other triode and pentode tubes of similar characteristics may be employed in the first two stages, the 6BH6 and 6C4 were chosen because they have low heater currents (150 ma), which have been found to minimize hum problems.

The high degree of stability in this amplifier is achieved by means of three negative feedback paths of the simplest type as described below :

An adjustable capacitor Cf2 = (30 - 300 μμf) is connected across the feedback resistor to provide control of the feedback factor at the higher frequencies below the peak leveled by Cf1, discussed above.

The following procedure should be employed to adjust the feedback networks for stable operation of the Universal Amplifier.

Feedback factors as high as 40 db (a reduction of 100:1 in gain) have been achieved with high-quality transformers. However, the amplifier then requires a 10-volt rms input signal for 15 watts output, whereas approximately one volt is sufficient for full output with 20 db of feedback. No difference in listening performance has been discernible with increase of the feedback factor beyond 20 db.

If any perfectionist (more power to such) does not accept the balance of the cathodyne phase splitter as being adequate, he may achieve theoretically perfect balance by adding a small adjustable capacitor across the cathode load resistor and check for perfect balance in the megacycle region. However, no test instruments should be connected to the cathodyne inverter itself, or the inherent added capacitance will invalidate the test results. The balance measurements must be made at the plate terminals of subsequent stages.

This amplifier has been termed "Universal" since it is believed capable of producing the optimum performance which is obtainable from any output transformer of suitable impedance ratios. There is no reason to believe that larger and smaller power tubes than the type 5881 cannot be used with equal success. However, the author takes a dim view of any type of operation of the output tubes except class A unless the output transformer is a top-grade unit and the screen grids of the output tubes are fed from a regulated power supply.

The following notes are offered to prospective builders of the Universal Amplifier. 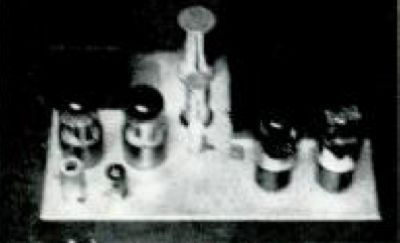 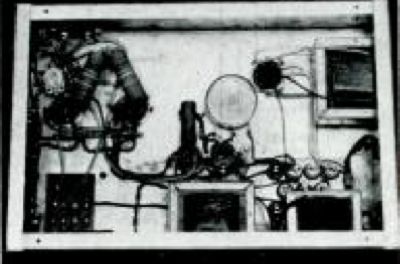 Figures 3 and 4 are top and bottom views of one version of the Universal Amplifier which provides plate and filament power for a large AM -FM radio phonograph console, and therefore uses two 5V4G rectifier tubes. 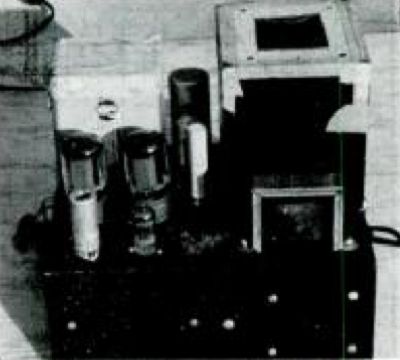 Fig. 5. Another embodiment of the "Universal" amplifier - this one uses silicon rectifiers in the power supply section.

Fig. 5 is view of a second version of the Universal Amplifier using silicon rectifiers in the power supply. Masking tape used to protect the paint finish of the transformers during construction is shown in Fig. 5 as a useful suggestion.