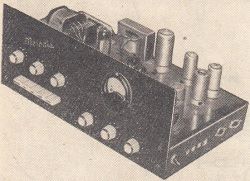 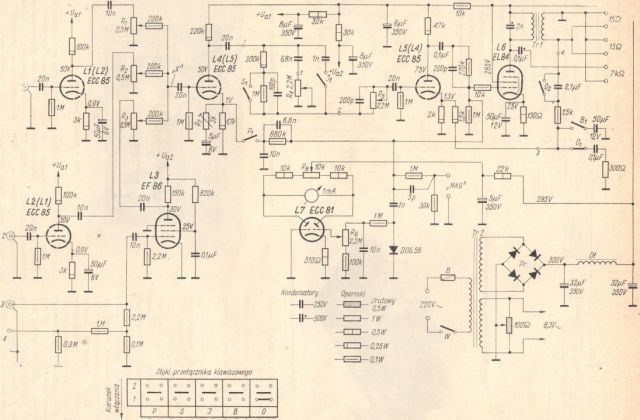 The 3-channel input stage is used to pre-amplify the control signals to the input of the circuit. Sockets 1 and 2 are used to switch on electric guitar pickups, or a tape recorder or a turntable. The input socket 3 can be used with a microphone, while the socket 4 (with a lower sensitivity) is connected, for example, with a guitar with a preamplifier or an adapter. The summation of the already pre-amplified electric waveforms takes place in the R1, R2, R3 mixer, the knobs of which are located outside the amplifier (three lower knobs on the right - figure 3). Between the mixer and the next gain stage (L4), a quick switch is used, which allows the amplifier to be used as the output stage of the radio receiver (we control the low frequency voltage from the radio after the detector). This makes the sound of the broadcast much more pleasant.

In the schematic diagram, the switch has been omitted for the sake of clarity, and is located in the place marked with "x". Between the successive stages, the amplifier's frequency response system was used, including a key switch and potentiometers for smooth adjustment. The assembly diagram of this switch is shown in Figure 4. 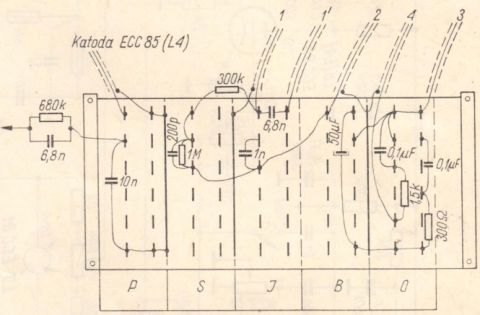 Changes in the shape of the amplifier characteristics with the use of a key switch are shown in the graphs in Figure 6.

A single L6 electron tube operates in the output stage, supplying two loudspeakers sets (GDS31-21 / 5 speakers) via the output transformer. The loudspeaker sets are made of plywood with dimensions of 470 × 320 × 203mm. When using electroacoustic transducers type GD31-21 / 5 w in loudspeaker sets, additionally tweeters should be used in order to extend the bandwidth transmitted by the system. When turning on the loudspeakers, pay attention to the phase coherence of the connected speakers. At the same time, an additional output signal was led from the anode of the L6 electron tube through a 0.1μF capacitor, enabling the speaker to be connected with a transformer (when using a longer connection line).

The "MAG" output is used to listen to the amplified waveforms or to record them on a tape.

In order to be able to assess the amplitude of the signal transmitted to the amplifier's output, a tube voltmeter with an L7 electron tube and a 1mA milliammeter was used. The "zero" adjustment is made using the R8 = 5kΩ potentiometer, and the R6 potentiometer (right knob above the switch) is used to adjust the voltmeter sensitivity. The indicator is helpful when transmitting from one room to another, if we cannot practically (by hearing) determine the magnitude of the controlled amplitude. The division of the milliammeter scale can be scaled in decibels.

The amplifier's mains rectifier operates in a full-wave bridge circuit with an LC-type smoothing filter.

The chassis is made of steel sheet and painted with nitro lacquer. Side plates (input and output sockets) are made of aluminum sheet. On the left side there is a PCB with output sockets, while on the right side there are all input sockets. This solution is advantageous in that it eliminates the need to use shielded cables. Only the power supply cable and the potentiometer connections in the mixer are routed in the shielding sheath.

The front panel is a bakelite plate with potentiometers, a rocker switch and a drive indicator.

On the bottom there is a suitably shaped cover made of steel sheet, which protects the entire amplifier system against the influence of foreign interference fields.

The amplifier is made of components manufactured in the country and easily available on the market. The layout is relatively simple and does not need to be discussed in greater detail. The assembly connections are shown in Figure 5. I do not provide exact detailed drawings; I leave the details of the amplifier and housing to the ingenuity of my readers. Photographs can be of some help - Figure 3 and Figure 5. 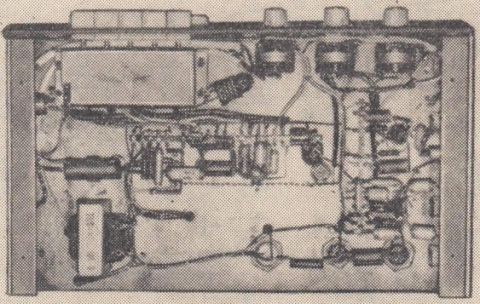 The measurements of the amplifier were made by feeding the signal to the input sockets 1 and 2, and the mixer potentiometers - apart from the potentiometer of the tested circuit - were "muted". At the same time, it was found that the crosstalk between the channels was minimal. The R4 and R5 timbre knobs were set to the maximum bandwidth. 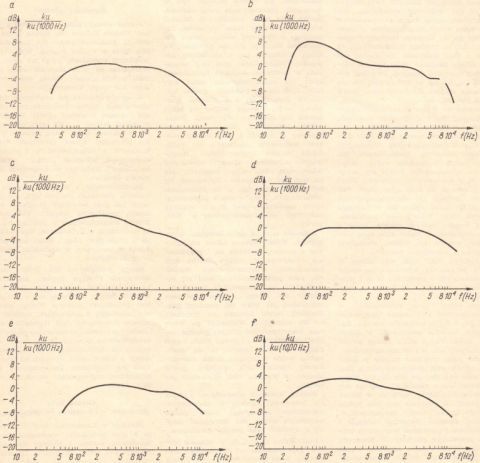 TECHNICAL DATA OF THE AMPLIFIER