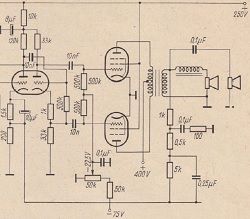 The human ear is not equally sensitive over the entire range of audible frequencies. It shows maximum sensitivity for frequencies ranging from about 1kHz to 3kHz, and this property occurs the stronger, the weaker the intensity of the sound perceived by the ear. This non-linear frequency response of the ear reduces the perceived sound experience when listening to music at low volume levels. At high sound levels the differences in ear sensitivity decrease and the reception is more accurate. It follows from the above that the adjustment of the volume of the reproduced broadcasts should be related to the adjustment of the frequency characteristics of the loudspeaker amplifier.

At a low volume level, i.e. with lower amplification of the amplifier, the low tones and high tones should be emphasized in relation to the medium tones, or the medium tones from 1 ÷ 3kHz should be muffled in relation to the low and high tones, and so much more, the smaller it is. power output from the amplifier. As a result, it is possible to achieve such changes in the characteristics of the amplifier that the ear will perceive the emission with the full balance of sounds, regardless of the output power.

Fig. 1 shows a schematic of a high-quality amplifier that meets the above conditions. The 20W output power allows you to amplify large rooms or drive a large sound column. 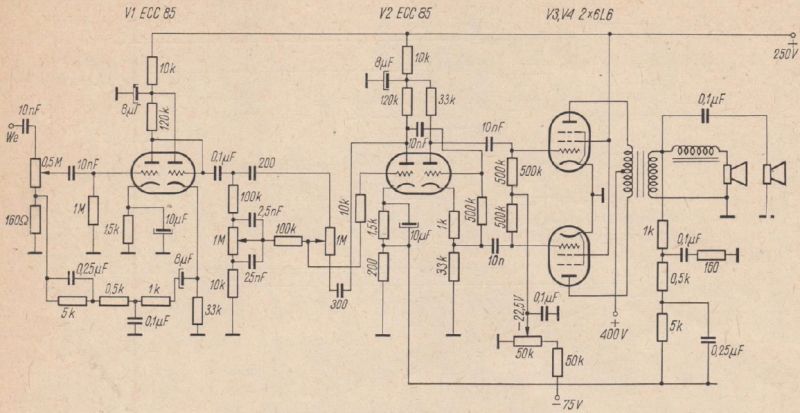 The first stage of the amplifier with the ECC85 electron tube is a voltage amplifier with a cathode follower that controls the low-resistance quadruple of the negative feedback circuit. The frequency response of the quadruple has a flat maximum in the range of 1 to 5kHz, so that the negative feedback at these frequencies is the strongest. The reverse voltage Uzw is fed to the opposite end of the volume control potentiometer in relation to the voltage Uo controlling the amplifier. The feedback voltage is deposited on the resistance of the potentiometer and the internal resistance Ro of the signal source Uo, as shown in Fig. 2. 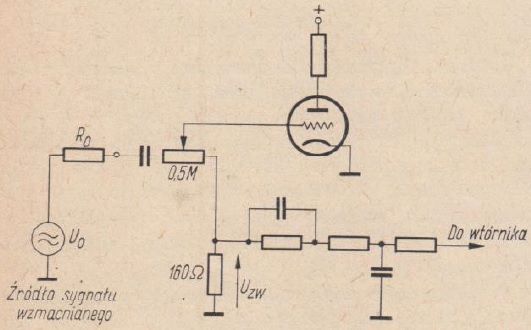 The circuit described above enables the simultaneous adjustment of the amplifier gain and frequency characteristics without the use of mechanically coupled potentiometers (Beethoven receiver).

The output voltage of the above-described first amplifier stage is then fed to a bass and treble level control circuit; this circuit provides the possibility of level adjustment within ± 20dB at the separation frequency of 600Hz.

The output voltage from the level controller is then re-amplified by one triode V2 system (ECC85); the second triode of this tube works as a phase inverter to drive the two final stage tubes 6L6 in a push-pull arrangement. The output voltage of the amplifier powering the loudspeaker is also used to realize negative feedback including the last 3 stages of the amplifier, i.e. one voltage gain stage, a phase inversion stage and a power stage. In the feedback circuit, a cross used in the volume control circuit was used again. In the final stage, the feedback depth is constant and depends on the value of the resistor in the cathode of the first triode of the tube V2 (in the 200 Ω diagram). With a small output transformer ratio, the value of this resistor may turn out to be too high and lead to excitation of the output power stage. Then the value of the resistor should be reduced, e.g. to 150Ω. The task of this negative feedback circuit is to reduce the distortions arising in the last stages of the amplifier, and to additionally increase the frequency response at the ends of the acoustic band.

The power stage of the amplifier is built in a simple circuit, without the power electron tube shielding grids being supplied from the transformer's taps. Only sectioned anode winding was used. The secondary winding is wound between the anode winding halves (Fig. 3). 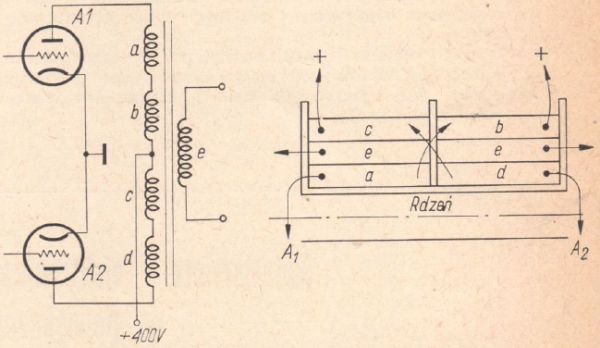 Fig. 3. The way of winding and connecting the output transformer

Despite the simplification of the transformer structure, its frequency response is flat in the range from 30Hz to 20kHz.

The transformer must be assembled without a gap. The power output from the amplifier's output stage exceeds 20W, which in practice is quite sufficient. When using EL36 electron tubes in the final stage, instead of 6L6, the output power is about 50W (with an appropriately changed transformer ratio). On the secondary side of the transformer, the tweeters are powered by a 0.1μF capacitor in order to protect them from being damaged by the high power generated by the amplifier in the bass range. A low-resistance choke in the woofers circuit prevents voltages at higher frequencies from entering them.

In order to make the amplifier work independent of mains voltage changes, electronic anode voltage stabilization was used. The cost of an additional system, which is this type of stabilizer, in relation to the cost of the entire amplifier is insignificant and amounts to about PLN 150, while the benefit of using it is disproportionately high. Smooth regulation of the output voltage is achieved, the ripple of the rectified voltage is reduced and, of course, a constant output voltage, independent of load changes and voltage fluctuations in the supply network. By means of the stabilizer system described below - Fig. 4 - it is possible to achieve changes in the output voltage within 2V, with a load change from 0 to 70mA. Voltage changes of this order with mains voltage fluctuations within ± 10%. 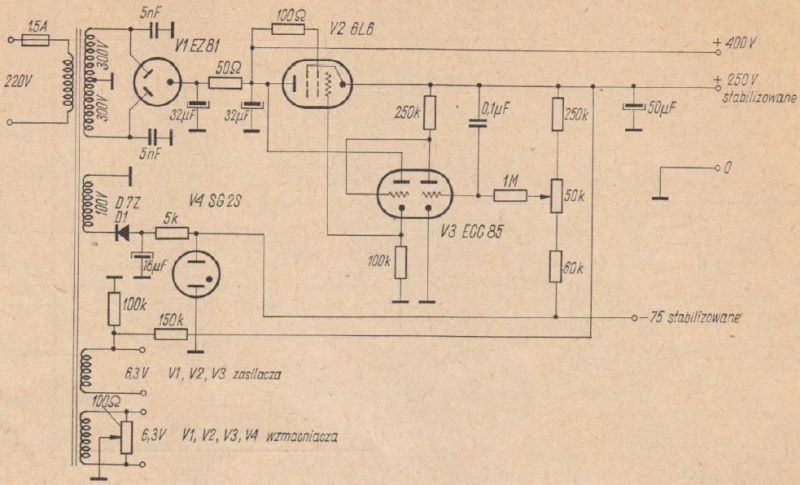 The output of this stabilizer can be used to supply additional power to even a very complex AM or FM receiver, because the permissible load current of the stabilizer is about 100mA.

The 6L6 vacuum tube is a series stabilizer tube, the internal resistance of which is regulated by a two-stage DC amplifier. The changed output voltage of the stabilizer due to a change in load or a change in mains voltage is amplified by a DC amplifier with an ECC85 duotriode. The output voltage from the ECC85 electron tube drives the electron tube 6L6 in such a direction that changes in its internal resistance and voltage drop across it counteract changes in the control voltage of the DC amplifier. In this way, the circuit itself aims to maintain a constant output voltage.

It should be noted that in systems of this type - even the most complex - there will always be a change in the output voltage. The magnitude of these changes is inversely proportional to the gain of the DC amplifier.

The reference voltage for the stabilizer is provided by the 75V ion stabilizer. The stabilized negative voltage also serves to polarize the grids of the amplifier power tubes. The potentiometric voltage regulation of the grids enables an easy change of the type of tubes used, e.g. to EL36 or other, and the simplest and best selection of the operating point of the tubes.

Since the voltages of the control and shielding grids of the power tubes are electronically stabilized, there is an extremely low mains hum and imperceptible changes in output power.

(Supplementing the article: Radioamator i Krótkofalowiec 1966/11)