With a little help of Allegro (online auction site) I became the owner of the 100BIS PS1 tube device. Although I bought it outside the auction but Allegro was unwittingly involved in the transaction. The manufacturer of the device apparently did not attach importance to such a "trifle" as the device name. According to the inscription on the front panel and content of the Instruction Manual I bought a "control panel", and according to the rating plate information and leaflet I bought a "control console". So let me use the following description of the term -"tube mixer".

Mixer was produced by "Team Training Workshop", Wroclaw, Cherry Alley. According to the Instruction Manual, control panel PS-1 (the type is another misinformation) is a component of 100-Bis electroacoustic set, consisting of one mixer and in addition, one or more 100-Bis tube amplifiers. Manufacturer recommended, for anticipated cooperation, mixer with two amplifiers.

100-Bis mixer, which I am the holder, is not an ordinary 100-Bis tube mixer. From the group of all 100-Bis mixers that still exist on Earth this one is distinguished by two features:

While the first feature I mentioned, plays only the role to make this story more interesting (less boring), the second feature is an important advantage of the mixer. How many antique tube devices collectors had the opportunity to encounter the device, untouched by human hand for a few decades? It's like a step back in time.

Well, enough talk, I invite you to look at photographs.

In Fig. 1 the mixer, shortly after unpacking it from the box and placing on the improvised photographic bench is shown. Improvisation meant  placing the mixer on the white sheet of paper. This has been appreciated by one of my cats named DeeDee, who so effectively prevented me taking photographs without her personal participation, that all the other pictures I had to do it in a completely different closed place. During the photo session, for the entire time I've heard through the closed door of her protests expressed by meows and scratching. Apparently she felt the mint to the "magic" of vacuum tubes. 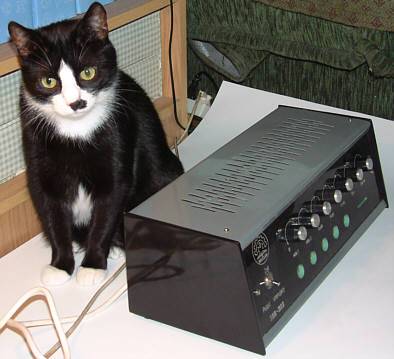 Fig. 1. The hero and assistant in all its glory

And here is "physical evidence" that the mixer was in original packaging. After opening the cardboard box and taking out the mixer, I found this piece of paper at the bottom of the box. It tells that I have become the owner of the device with the symbol 100BIS, which is nothing but a control console. At first I thought I accidentally bought some element of control system of the power station. 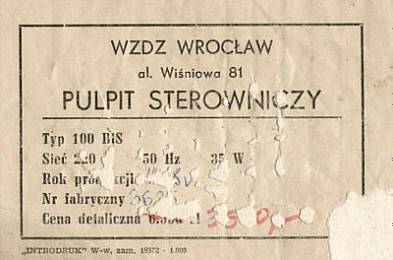 The tears and holes in the paper are the result from mechanical damage to the paper by mixer movement inside the carton. Unfortunately, they effectively prevent reading of the retail price (that already had some malicious force to act, because I'm curious how much it costed).

This is the mixer. It is beautiful, isn't it? I really like it. It has nice proportions, attractive colors, sleek ventilation slots and such cool green rims of sockets holes. Just WOW!

Zoom in on the front panel. The dust that has accumulated over many years of storage can be seen. Of course, after taking photos, the historical dust was removed by chamois cloth.

In the picture you can see the manufacturer's logo (so between us it is pretty cool and even trendy) and the name of the device - no doubt - I bought a control console rather than control panel - what a relief. 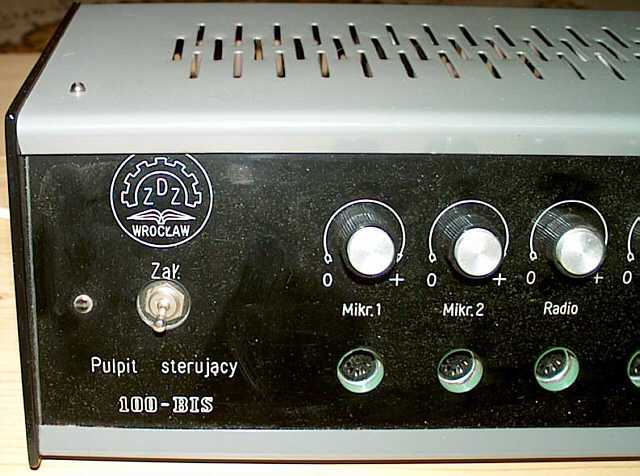 Fig. 4. The trademark and name

And here is the back/top view of the mixer. It's really good. My satisfaction grows, the world becomes more and more pink and the pressure rises, because soon I proceed to what tigers like the most - opening the device's cover. Unfortunately, this sublime moment did not last long, because I started to take the next photo of the bottom of the mixer.

I turn the mixer upside down and what do I see? That's right - I can see what anyone can see in Fig. 6.

Fig. 6. View from the bottom

The unit was manufactured in 1978. Mixer waited for me 26 years just to show this small detail in the lower right corner of the photograph. Poorely painted portion of the side wall adjacent to the unmatched part of the bottom cover. And if so, why the fuse holder would be placed in the middle of the back of the hole and rubber grommet cord would be smaller than the diameter of the cover hole? If it were so, the fuse could be removed by  fingers not pliers, and grommet could not generate any rear wall bending. As can be seen in the "Team Training Workshop" such things were simply unacceptable ;-(. 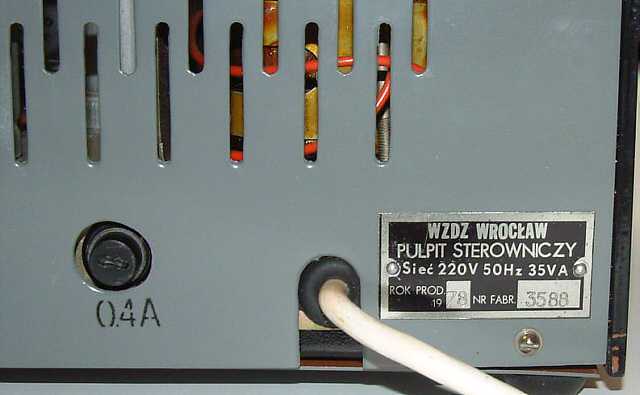 The mixer has two separate covers. One protects the top and back (L-shaped metal sheet) and the other bottom of the device. In Fig. 8 and 9 you can see the mixer after removing the first cover (the L-shaped one).

The interior of the mixer gives the impression of reliability and tidiness. The designer even predicted an appropriate niche for a fuse holder.

Fig. 8. The interior of the rear

Fig. 9. The interior of the rear from a different perspective

Here is a more detailed view of the power section. Mains transformer has a C type core. It has been well twisted and impregnated. During operation, you can not hear the slightest hum, and the core does not vibrate. A big plus! 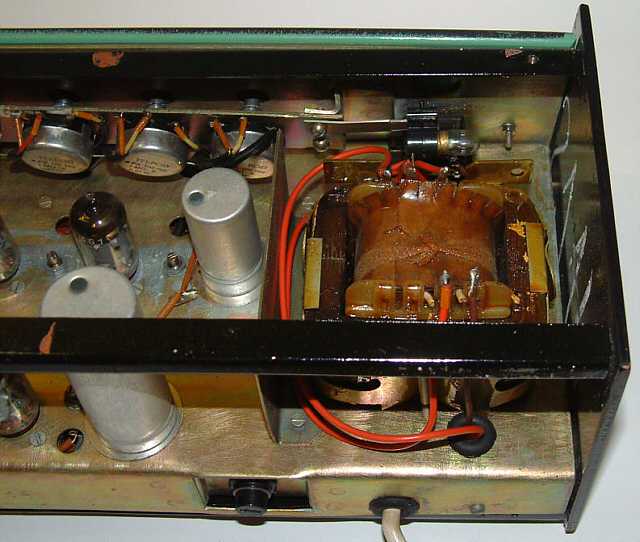 Please note that the pass-through holes are equipped with rubber grommets, so there is no fear that the wire insulation will be cut by the edge of the steel plate. I mention this because recently I've seen audiophile tube amplifier for 16000 euro, in which the manufacturer "saved" money on grommets.

Two output sockets. So now you know why the manufacturer recommends using a mixer control with two power amplifiers. Fitting for horizontal chassis to the bracket and therefore lower cover is an example of a typical bungling of the 70's. Through the gap you could easily squeeze the mouse. 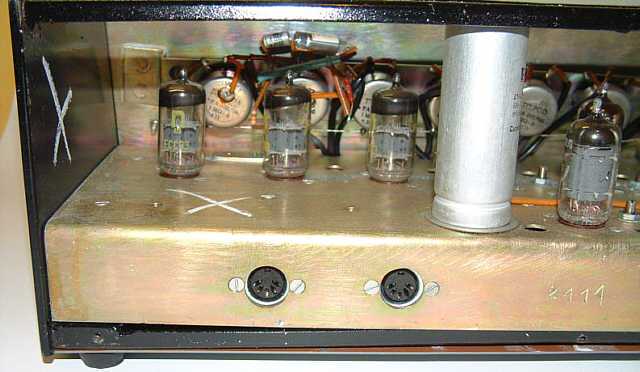 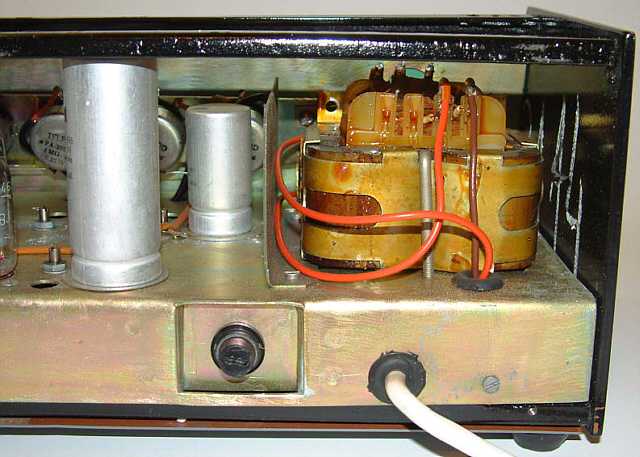 This perspective view shows the mechanical construction concept of the mixer. According to me it is excellent.

One before last look at the mixer before unscrewing the bottom cover (the "plate with holes" and the rubber feet), on which mixer rests during operation.

Fig. 14. The bottom and some of the details of the back

Here's the last view. Let's suffer for a while loooking on the fitting or rather "unfitting" of the whole mixer framing.

To view the mixer from the bottom, the steel cover attached with four screws must be removed. These screws are screwed through the rubber feet, which are the mixer prop (Fig. 14 and Fig. 15). In contrast to the upper cover, I had problems with loosening bolts. Why? Well, so - please take a look at Fig. 16 and Fig. 17. I think that I  had to meet the miixer housing contractor. I know! It's probably the blacksmith shoeing a horse that when he missed the hoof then he nailed to the fence himself. PEOPLE HELP !!! I'm losing my mind. I really can not understand why the holes in the cover are shifted about half a centimeter relative to the holes in the chassis !!!!!. And besides, these shifts are in different directions. Even without a simple wooden ruler the holes could have been fited much much better. 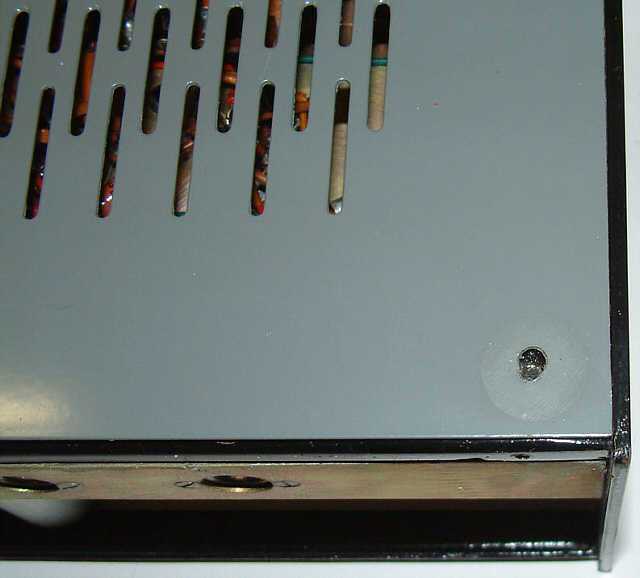 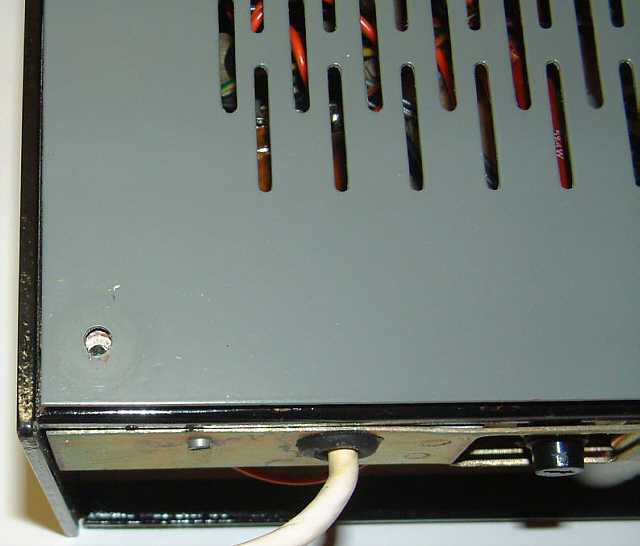 I don't count on the explanation of this phenomenon and add it to a group of supernatural phenomena, which includes such a mystery like: why in my country is not possible to level a surface of a pit road with a surface of asphalt. Perhaps routing holes and pit road leveling depends on the same group of hostile aliens from outer space?

Anticipating a question I explain that I did not make photos of the other two holes. Why? It's probably obvious - paralyzing fear of psychiatric disease.

Finally came the mixet interiod and electrical installation details. The mixer uses a classical assembly with two mounting strips. I recommend adepts placing first steps in the "point to point" wiring to carefully study all following photos. In order not to miss any importand detail I present ten photographs (Fig. 19 to 28), which can also be used for maintenance or reconstruction of the mixer.

Fig. 18. View from the bottom after removing the cover

The excerpt showing how to install the "magic eye" (EM84) used as an indicator of the level of the output voltage. 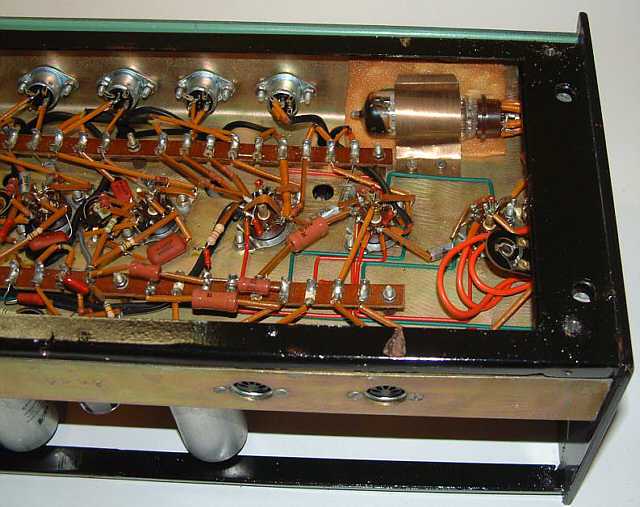 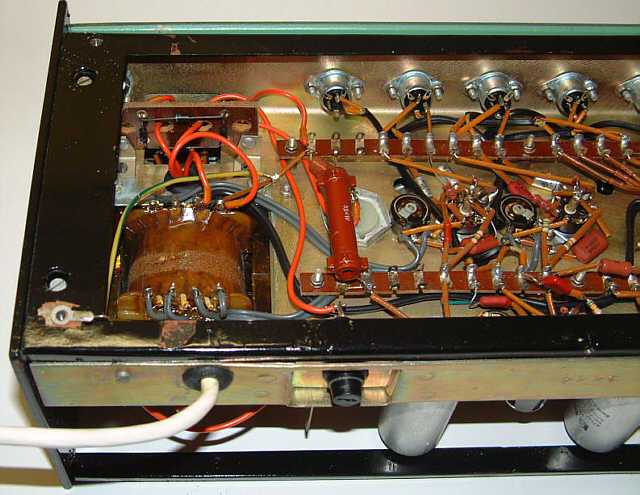 Details of the center part. It is clear how the input jacks are wired. 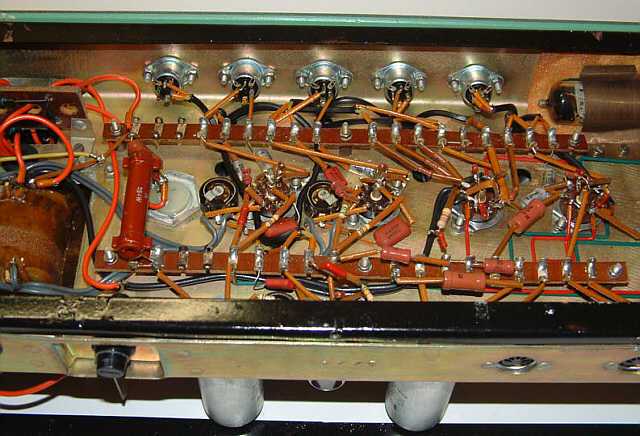 One more shot from the bottom.

Outlets wiring and additional small mounting strip hidden under the right side of the bracket. 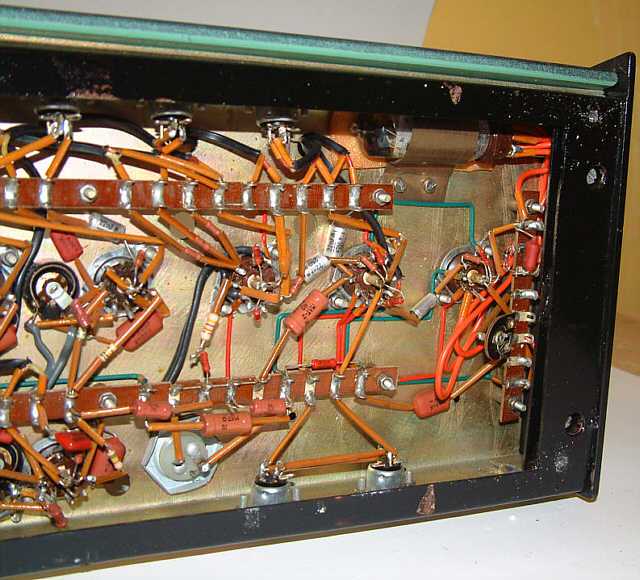 Here's what you can see under the power supply section. 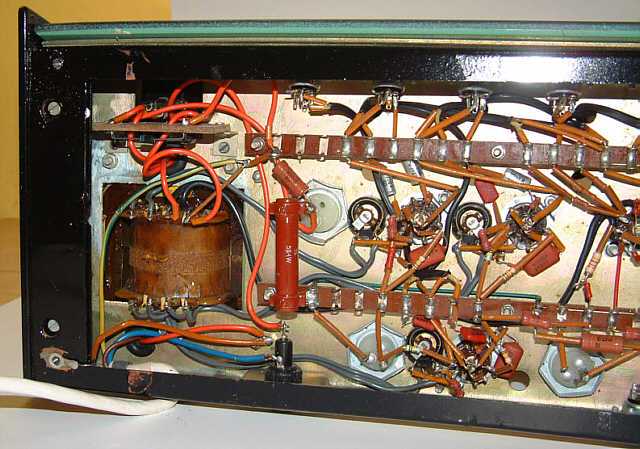 A series of highly detailed photographs. If someone wanted to see exactly how the individual elements have been soldered, it may do it now ... 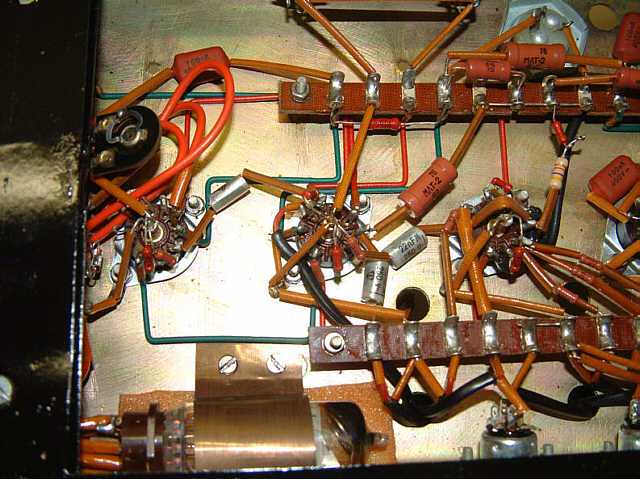 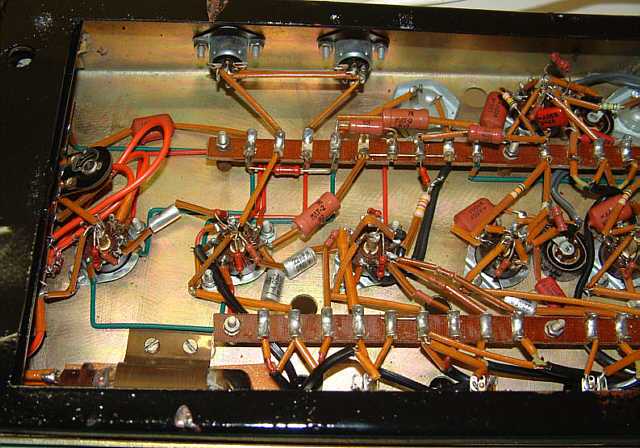 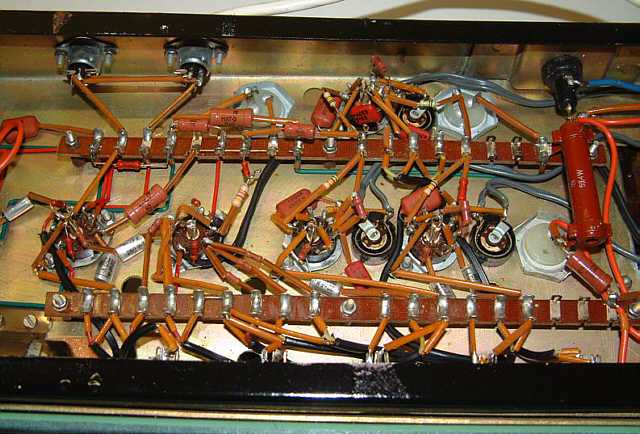 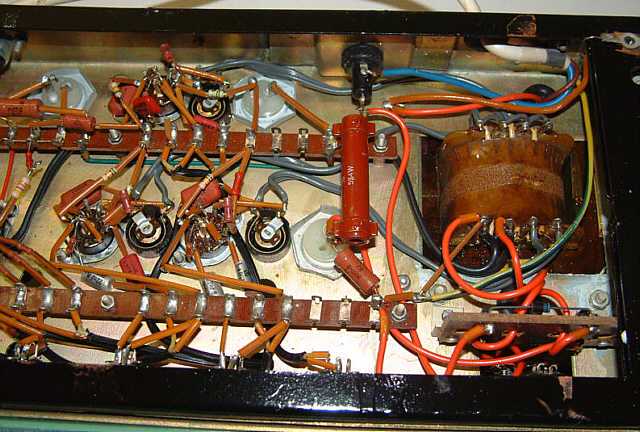 Vacuum tubes in all their glory. Chalk graffiti for free. 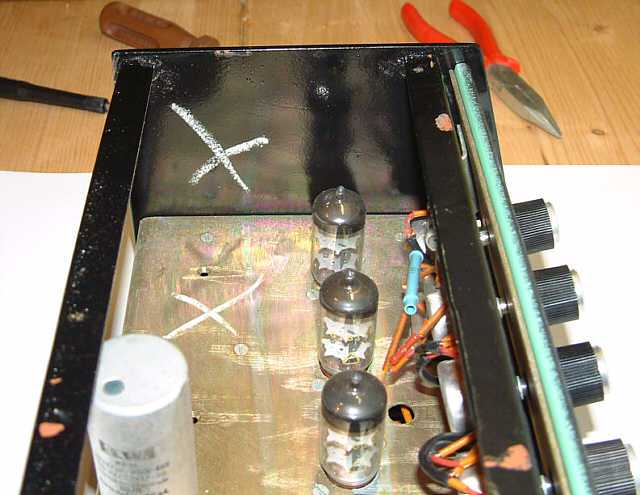 Just as in the caption: transformer and mysterious chalk graffiti. 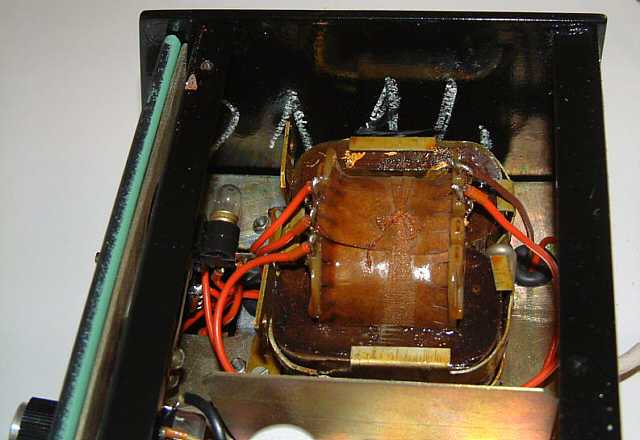 Tubes, potentiometers and artistic details of the chassis painting. 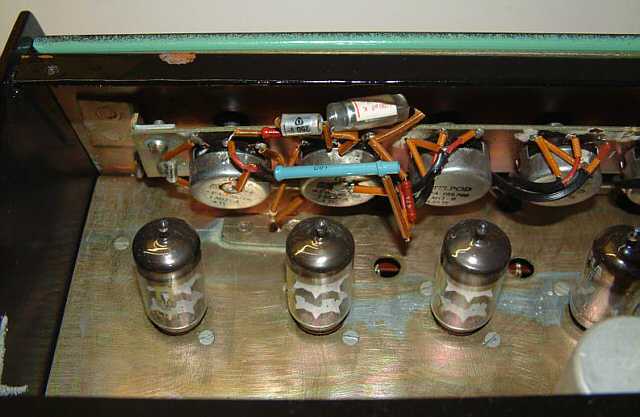 Here you can see even better how the contractor showcased his artistic subconscious details. Dr. Freud, comment it please. 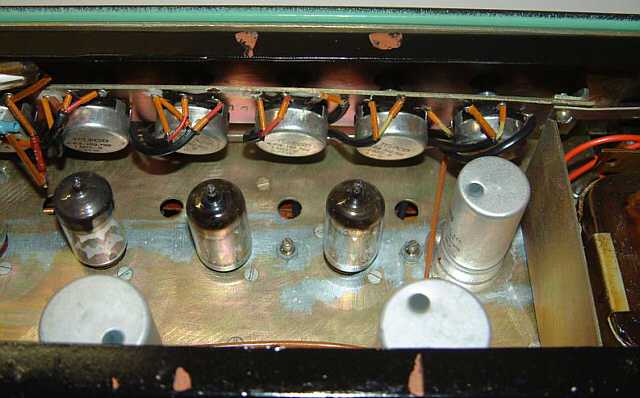 Let's look at the tube temple. We walk about between the two columns (electrolytic capacitors), guardian (tube) is already waiting to take us in front of a row of worshipers (two tubes) into the tube-magic temple. 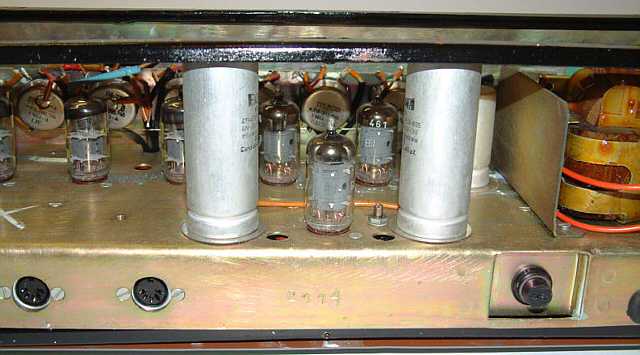 At the end - small "curiosity". After taking photos I screwed the mixer and after this operation I had the impression that the "gaps" became smaller. May be it's just a subjective feeling, or may by my negative opinion on these "natural" ventilation holes made them shrink. Does that mean that I should have to unscrew and screw the mixera couple of times to get rid of them? Probably not, but the thought that it is possible improve my mood ;-).

Principles of operation (from original manual)

The control panel contains all the controls of 100-Bis set. The signal from the Mikr1, Mikr2, Radio inputs is reinforced by separate  EF86 pentodes. The level of these signals is regulated by separate knobs, and the signals add up on the grid of the first triode of ECC83 tube.

Series resistors R10, R11, R12 reduce the mutual dependency of signals. The second triode of ECC83 tube can be given signals from the tape deck and turntable inputs, each governed by a separate potentiometer. Summing the signals from all inputs is realized by common to both triodes anode resistor R16. Then the signal goes to the second ECC83 tube, where it is amplified and subjected to "tone adjusting". Control system allows separate adjustment of bass and treble. The signal comes from the cathode follower (second triode of ECC83 tube) to the output jack (DIN socket).

Output voltage (up to 0.5V) is reinforced with additional triode and fed to the indicator (EM84) which allows to determine the level of output signal (deflection rate is controlled by PS potentiometer - located inside the enclosure).

I would be grateful for any suggestions and comments related to the 100Bis mixer.