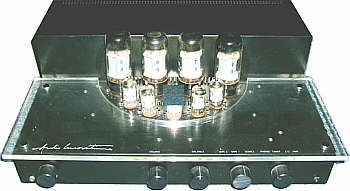 General view of the amplifier is shown in Fig. 1 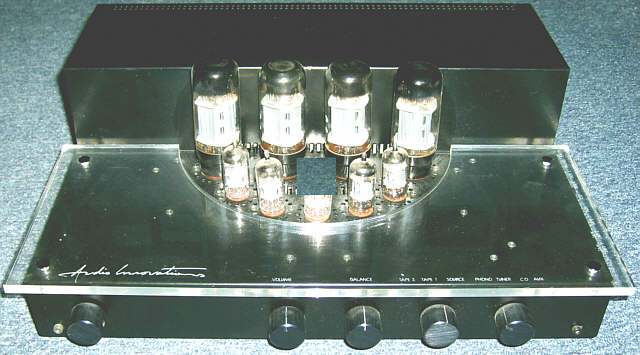 The basic technical parameters of the amplifier are shown in the Table.

Amplifier described here differs from the stated (manufacture) specifications in terms of the tubes. The basic difference - visible to the naked eye - is the application of 5881/6L6 tubes instead of EL34. This kind of "substitution" is very often used by the owners of this model. Even a sketchy search of the Internet resources shows, that amplifiers of the original cast EL34 even belong to a minority.

From sleek design, amplifier combines the very classic body shape (reminds me of the appearance of a Lorelei - a tube amplifier familiar to polish audiophile community) with an unconventional addition of a transparent acrylic plate which is mounted on the top. In addition to purely artistic functions it performs an important information role - the fact it is a "base" for description of the input sockets and switches. 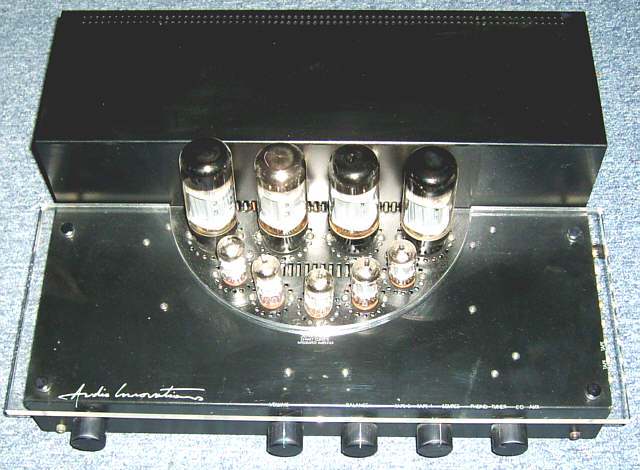 White descriptions on acrylic cover are clearly visible in Fig. 3. 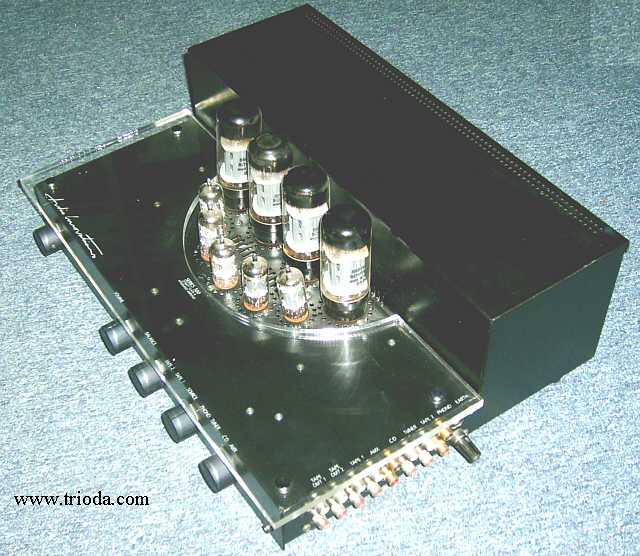 And here is the view from one side. An impressive set of input "cinch" sockets and "banana" cocket to connect the amplifier ground. Imagine amp service in the absence of an acrylic "cap". The real "massacre". I found out about this in person. Not being the owner of the amplifier, and thus not having handling reflexes, I spent fifteen minutes in vain, tried to correlate the signal outlets of setting switches. I insisted that I would not waste time to move to another room and bring a cover left there inadvertently. So what? - And I failed. Willy-nilly I finally brought the cover and just set the amplifier  with the help of the top cover. 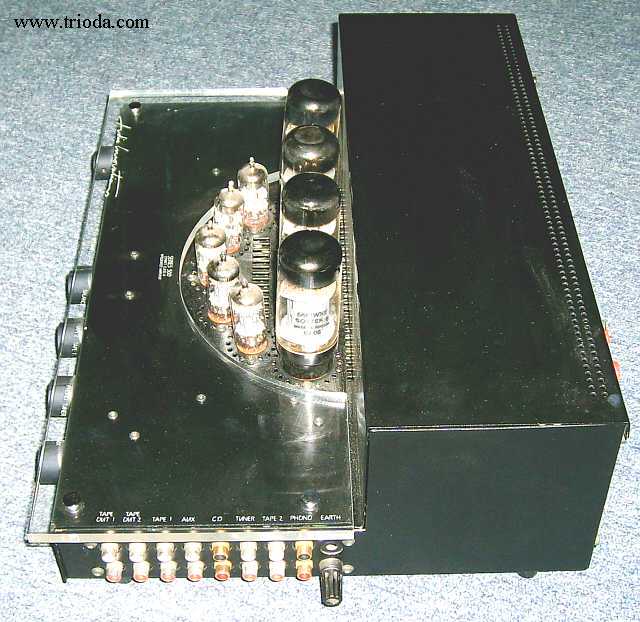 The only side of the casing, where the manufacturer has chosen to put any information is back of amplifier (Fig. 5). There is a set of speaker terminals. We have at our disposal three load resistance configurations: 4, 8 and 16 ohms. Applied sockets are perhaps a bit modest (visually) - but they are very sturdy and well secured to the chassis.

Copies of the amplifier from the end of it's production period (probably after buying the Audio Innovations by Audio Components) have only two resistance loads to choose from - there is no tap for 16 ohms, as shown in Fig. 6.  Unfortunately, this modification involved, not only the reduced number of taps but also decreased quality of output transformers. So, owners of the older - 16-ohm tap versions can feel very happy. 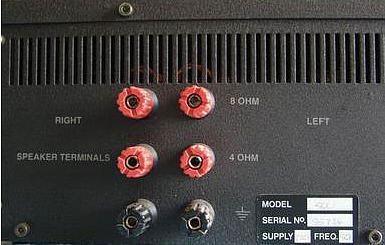 After a few photographs showing the exterior qualities of the amplifier time to show what is hidden inside. Before that, however, for the most inquisitive visitors, some circuit diagrams. Fig. 7 shows a basic layout of the amplifier.

In Fig. 8 we can see the input selector stage with two signal switches. 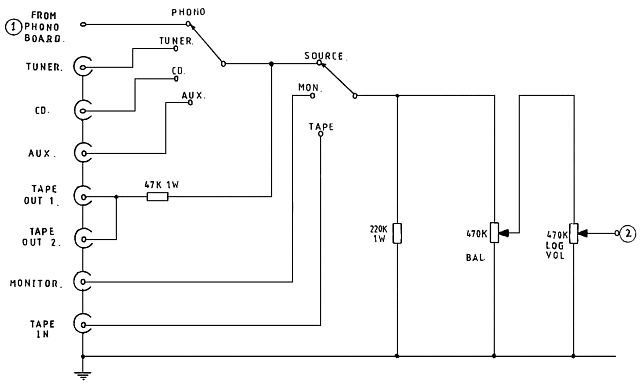 The amplifier is equipped with a dedicated "phono"  preamplifier shown in Fig. 9.

Let's see how the amplifier looks from the inside. The most common occasion for this is, unfortunately, equipment failure, the results of which it is placed on the workbench (Fig. 11). 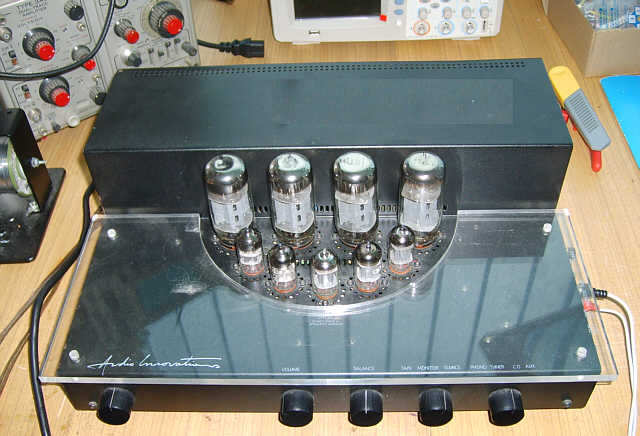 After removing the tubes that are not damaged during the inspection of the device (amplifier weighs about 17kg) and unscrewing the fixing screws, we grab the cover impatiently to look inside, and here a surprise waiting for us. The amplifier can not be opened, but only a little set aside (Fig. 12). 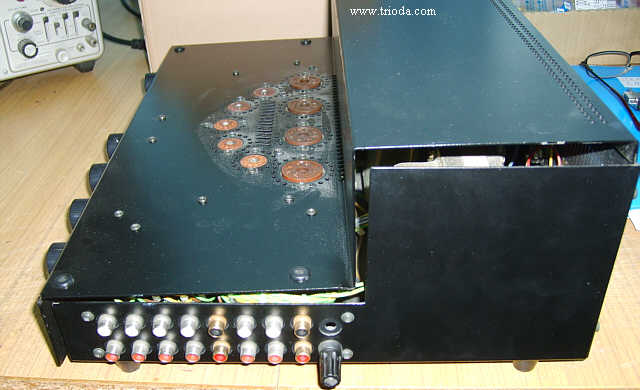 The method of installation virtually prevents free access to the interior. Getting to the section containing transformers, and power supply is extremely! difficult. Fig. 13 shows what is the most I was able to get the covers slide to open the cabinet. 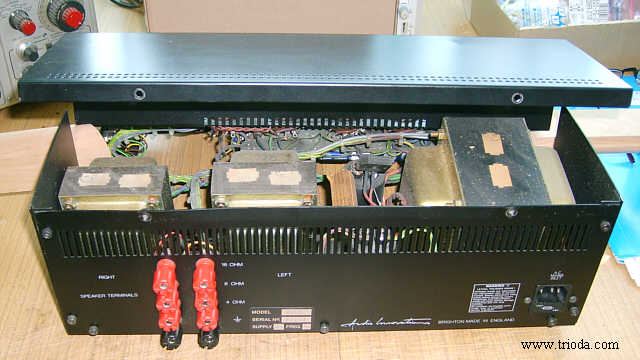 Since the long term manipulation of wooden wedges and spacers to got a little better access to the interior, it would be a regrettable waste not to capture this fact for a few photographs. Fig. 14 shows two output transformers of impressive size. 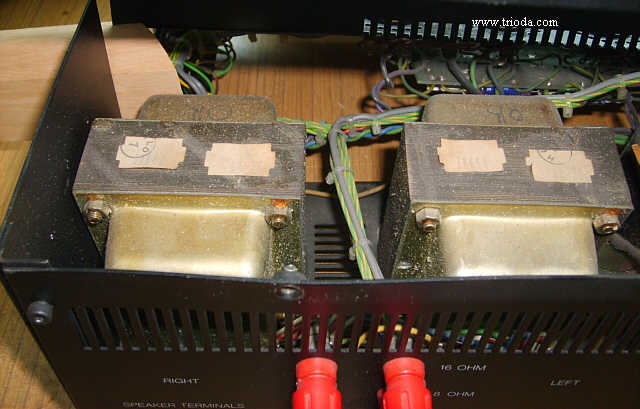 Fig. 15 shows the output transformer and anode voltage supply elements in the form of two large electrolytic capacitors (220uF/400V) attached to the chassis by means of clamps and soldered directly to their connectorsr: bridge rectifier and a high power resistor (47Omów/11W). Resistor and capacitors are the first stage of the anode voltage smoothing filter shown in the diagram in Fig. 10. 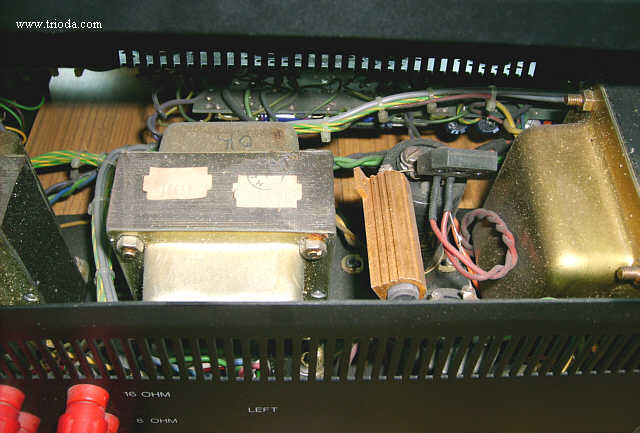 Fig. 16 shows the anode voltage rectifier andtop of the mains transformer - as impressive as the output transformers. 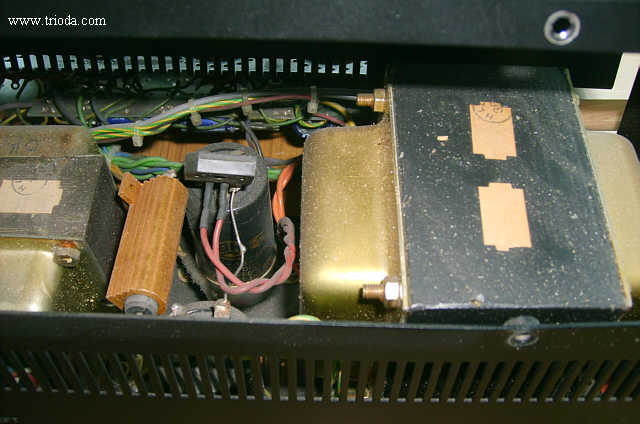 Well, now (Fig. 17) in a slightly magnified view of the elements of anode voltage supply (described above). 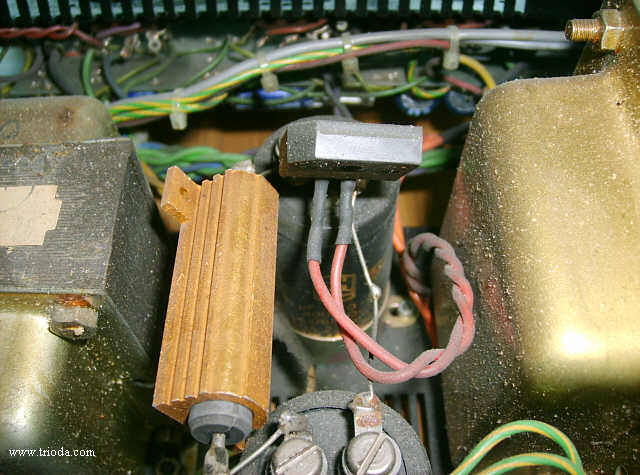 What to do when someone needs to replace one of the power supply capacitors, when the disassembly and assembly must be carried out using the "laparoscopic" method? If the width of "access gap" is equal to the diameter of the capacitor (which was provided by the amplifier designer), the replacement can be done using a properly prepared substitute. It is presented in Fig. 18. 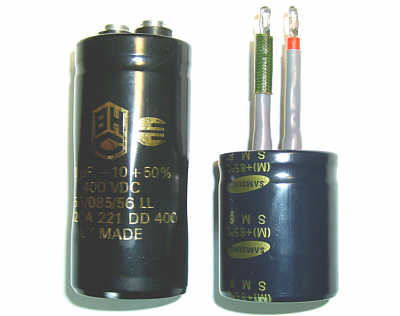 For a description to be objective - I can not ever complain about the complete lack of access to the inside of the amplifier. In the case of elements located on PCB is a bit better. From the bottom of the housing the amplifier is secured with sizable removable cover (Fig 19). 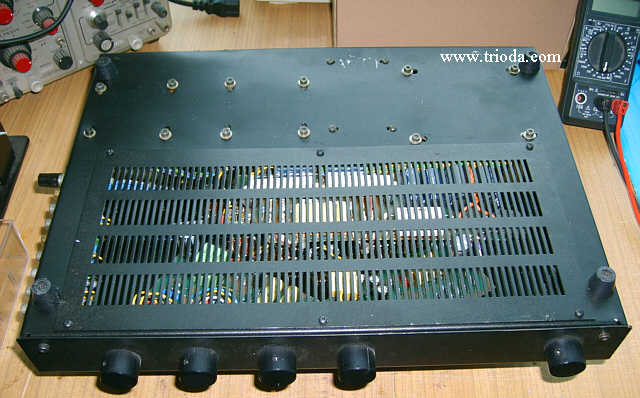 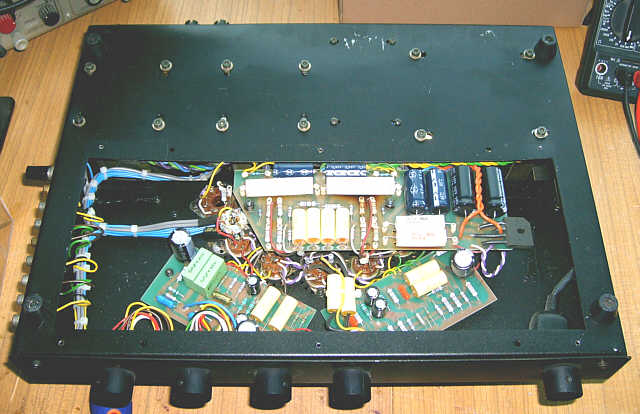 The same picture from a slightly different angle. As you can see, the PCBs are clearly visible. What a relief - you can follow the servicing activities without breaking fingers. But it is not as easy as it might suggest the photograph. Wires leading to the boards (and there are a lot of them what you can see in these photographs) are very short. Thus, the faulty element is clearly visible, but to desolder it and replace with another, we need small hands, a lot of prestidigitators skills and a lot of patience. 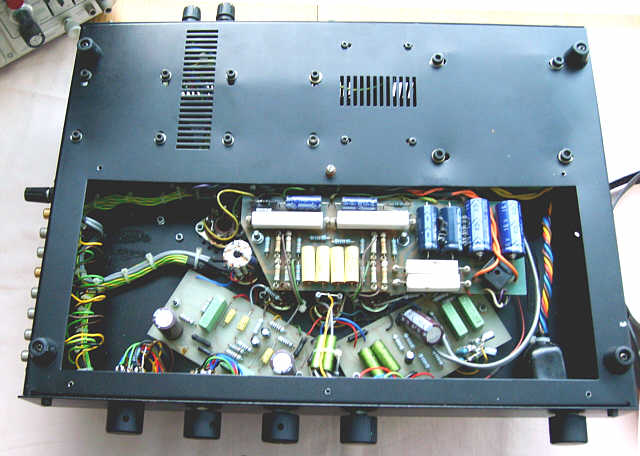 Here is a set of printed circuit boards. Even a cursory glance at the interior reveals the fact that the amplifier was unfortunately modified. I say "unfortunately" because I am a staunch opponent of making any changes in equipment produced many years ago, and aspiring to a "cult devices" without the need. It's as if someone had completed the portrait of Mona Lisa with additions due to new trends in modern art. My orthodox approach (probably due to the fact that I collect retro tube devices) is not "blind" and I acknowledge the technical interventions when they concern such activities as replacement of a defective elements (see Fig. 18).

Below there are some photos of the amplifier assembling details. In Fig. 23, the foreground shows the preamp "phono" board with two (distinctive in terms of dimentions) capacitors MKT 0.47 uF/400V through which the two preamp channels are connected to the amplifier input stage. On the adjacent tube socket can be seen very tasteful "mushroom" - thick laminate ring whose appearance indicates unoriginal originl (one of the "quasi - modifications" that have been applied to the amplifier). 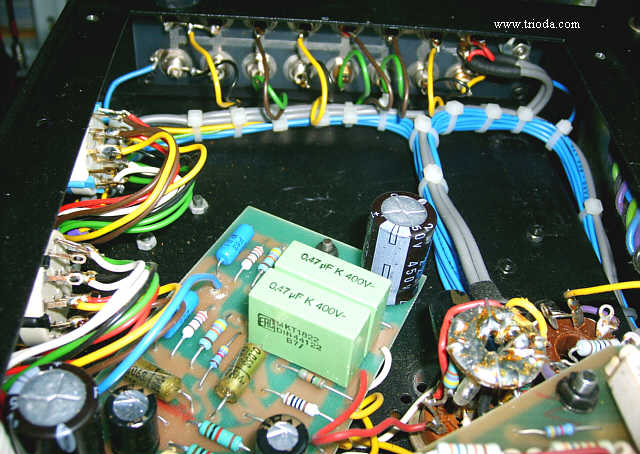 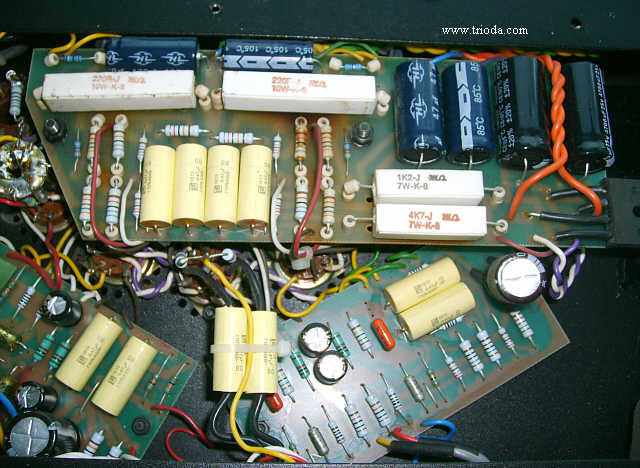 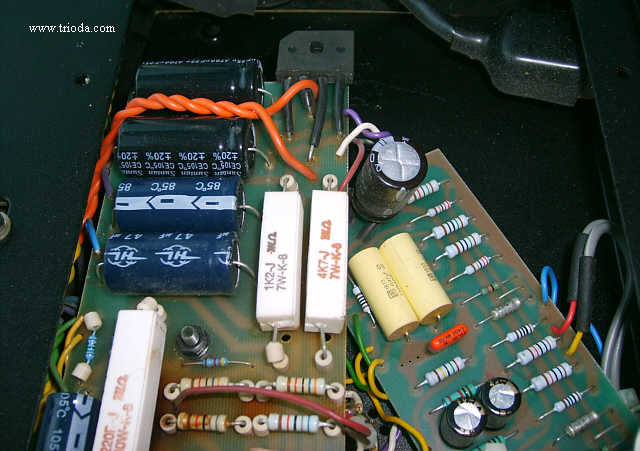 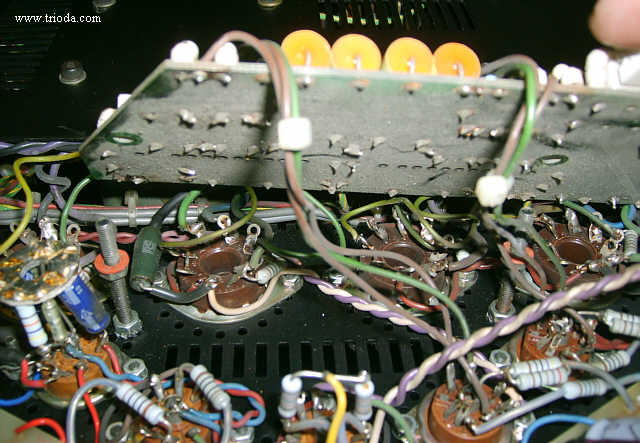 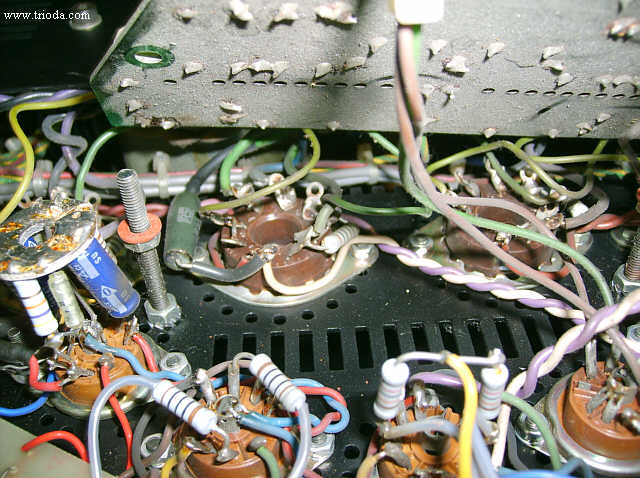 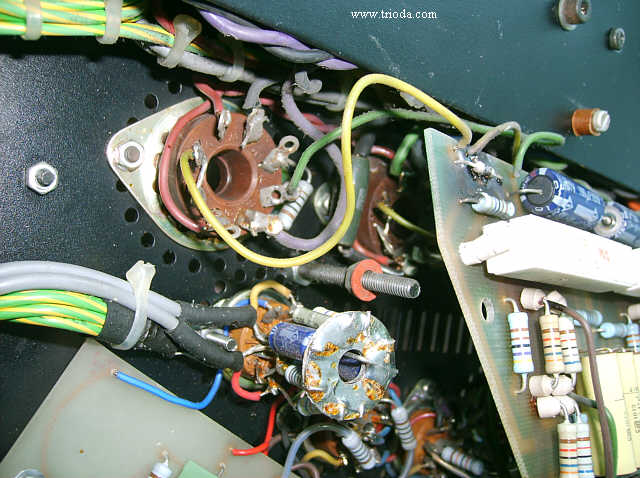 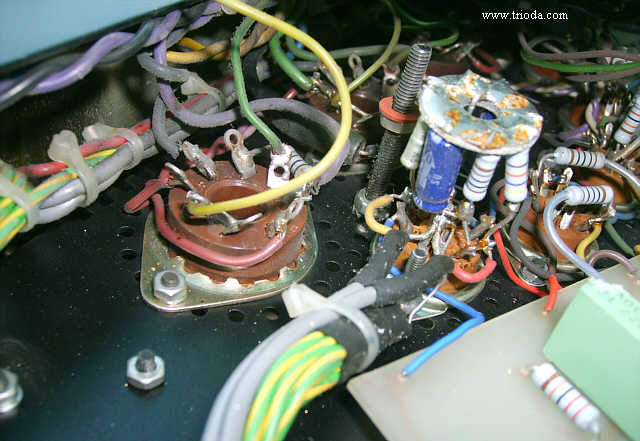 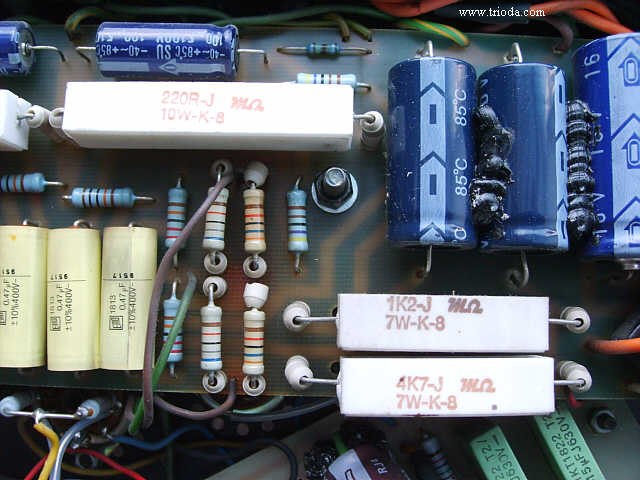 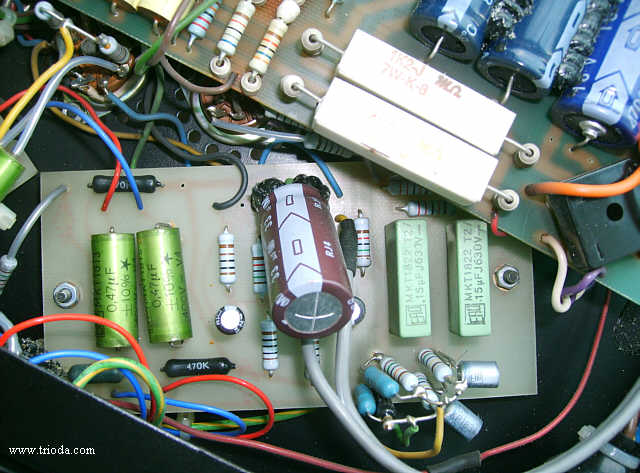 At the end - the view of the amplifier of the unusual position on the workbench during the measurements. 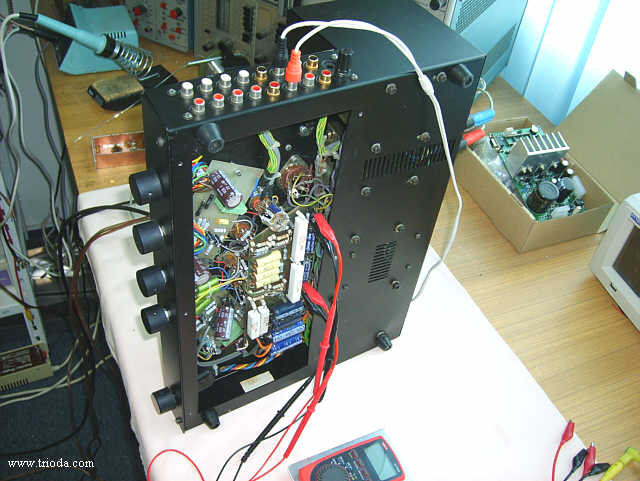 Usually, each audio description ends with the opinion of the sonic impressions of the device. Such opinions are characterized by a unique accumulation of metaphors with which the author is trying to convey to others what he subjectively feels, in other words, what if basically impossible to explain to the others. Not wanting to go this way, let me just say that in my opinion the amplifier plays really well. On a scale of "Radford" I would give it 8 points out of 10.